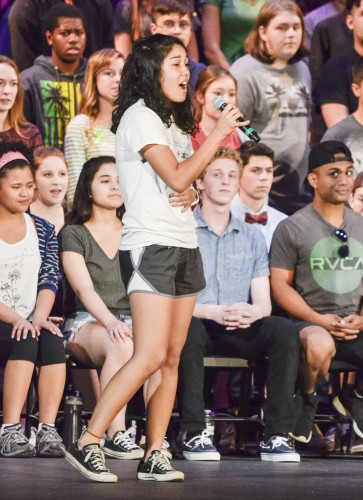 Claremont High School senior Camryn Texeira sings a solo in “I Won’t Say I’m In Love” from “Hercules” at the “Musical World of Disney” concert March 19 at Bridges Auditorium in Claremont. The show included songs from as early as 1930 with “Minnie’s Yoo-Hoo,” to 2013 with “Let it Go” from “Frozen.” The choir also sang tunes from other classic Disney movies such as “Aladdin,” “The Little Mermaid” and “The Lion King.” The Claremont High School choral department is made up of three subgroups – concert choir, treble ensemble and chamber singers. The chamber singers rank in the top 5 percent internationally. The choir will also compete in the Festival of Gold this year in Washington, D.C. / photo by Meghan Attaway

The Claremont High School choral department showcased classic Disney songs March 18 and 19 at its concert at Bridges Auditorium on the Pomona College campus.

The group, dressed in black and red, performed a mixture of older and newer songs, including such classics as “The Lion King’s” “Circle of Life”and “Frozen’s” “Let It Go.”

The roughly 180 students chorus, led by choral director Joel Wilson, have been practicing for “The Musical World of Disney,” since December.

“There’s so much great Disney music out there,” Wilson said, adding that he thought, “Let’s put it together in one show and call it a day.”

Some of songs were performed in full, while others were arranged in medleys.

The “Songs of a Disney Princess” medley was composed of “Part of Your World” from “The Little Mermaid,” “A Whole New World” from “Aladdin” and “Colors of the Wind” from “Pocahontas.”

Toward the end of the concert, the audience was invited to sing along to “Zip-A-Dee-Doo-Dah” and “Hakuna Matata” from “The Lion King.”

Then “All For One” from “High School Musical 2” served as the finale.

“I think that one is really close to millennials, so that one is fun for us,” said Isabel Eras, a junior at Claremont High School who has been in the choir for two years.

The “Disney Silly Sing-Along” was her favorite part, she said, because she used to watch “Song of the South” when she was younger.

“All of us grew up listening to this, so it was very nostalgic,” Eras said.

It was hard to tell who was having more fun – the performers or the audience.

“It was beautiful,” said Patricia McCormack, who brought her 7-year-old daughter to the concert.