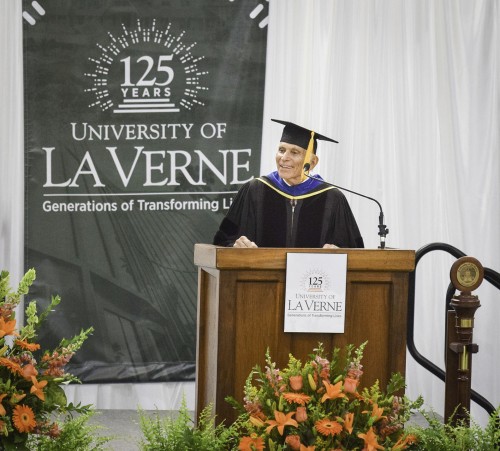 Professor of Business Administration and Economics Ahmed Ispahani delivers the keynote speech at the 125th anniversary Convocation ceremony Aug. 31. Ispahani has been teaching at La Verne since 1964. He spoke about his educational journey at the University of Southern California, from where he took his first teaching job at the University of La Verne during the last year of graduate school. La Verne was not his first choice as a career path, but after a year he fell in love with the environment, culture, community and heritage, he told the audience. / photo by Meghan Attaway

Green and orange flags and signs placed around campus built the community’s anticipation as staff, faculty and students gathered in front of Founders Hall to celebrate the University of La Verne’s 125th anniversary at convocation Aug. 31.

The pre-speech events wereheld in a different location, previously Johnson Family Plaza, due to the reveal of the newly installed plaque in front of the University knoll.

“I’m a new student so I wanted to see what the school’s about, learn about the campus and meet people,” transfer student La’Keha Green, a junior legal studies major, said.

Faculty members and administrators who would later walk in the procession arrived in their elaborate gowns and caps, while others showed school spirit with leopard print dresses and shoes or 125th anniversary T-shirts.

Ruby Montaño-Cordova, associate dean of student affairs, introduced the morning events and encouraged everyone to reflect on what the community has done for them.

“This is the opening to a year of celebration,” Montaño-Cordova said. “I had goosebumps and couldn’t go to sleep last night,”

The highlight of convocation was Professor of Business Administration and Economics Ahmed Ispahani who served as the keynote speaker.

Ispahani spoke about his educational journey at the University of Southern California.

After his last year of graduate school, Ispahani took his first teaching job at La Verne.

After a year of teaching at La Verne, Ispahani fell in love with the environment, culture, community and heritage.

Ispahani has been a professor at La Verne since 1964.

Ispahani asserted during his speech that the students are the most important part of the University, for without the students the institution would not have the commendable reputation it has today.

In addition, he encouraged students to enter their college years with an open-mind.

Phones later emerged from pockets and photographers adjusted their cameras preparing to capture the moment University of La Verne President Devorah Lieberman lifted the cloth off of the new plaque.

With the assistance of Provost Jonathan Reed, Lieberman rang the University bell the first five of 125 times total that day to commemorate the anniversary.

Many other selected members of the community rang the bell the remaining 120 times throughout the rest of the day of convocation.

Once the ceremony came to a close, the crowd of students and faculty dispersed into a block party and club fair.

This block party and club fair spread across Sneaky Park and the University Quad.

Despite the end of the ceremony, students continued to resonate with the messages the morning speakers as they learned more about the clubs and organizations on campus.

In addition, they were also able to get free items throughout club fair, including lunch boxes, T-shirts and temporary tattoos.

“I just wanted to see the tradition of the University and feel that I am a part of the community from the beginning of my daughter’s journey here,” John Sigaty said.