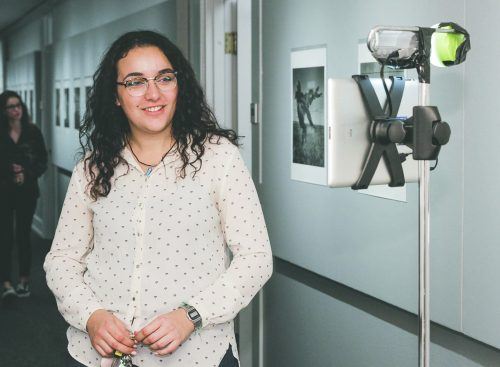 Senior journalism major Nadira Fatah talks to Canadian photographer Wes Bell via webcam Feb. 15 at “Snag: Impermanence on the Vast Alberta Prairie” at the Carlson Gallery. The show exhibits Bell’s photographs of plastic bags caught on the barbed wire fences that line a highway in Alberta, Canada. Bell conceived the project after driving home from visiting his mother, who was dying of cancer. He saw the snagged plastic as a metaphor for the impermanence of life. “Snag” will remain in the Carlson Gallery until March 16. / photo by Spencer Croce

The opening featured a video call with Bell.

His photos show plastic bags he found while crossing the Alberta prairie. Beaten by the harsh conditions of this deserted landscape, Bell used the remnants to depict his own emotions.

His career as a photographer and artist started after leaving his small hometown to pursue a studio-intensive program at the Alberta College of Art and Design, Bell said.

During his video call, Bell said he wanted viewers to understand that these photographs were deeply rooted in loss, mortality and remembrance.

The idea for “Snag” came when he learned of his mother’s cancer diagnosis. For Bell, these plastic bags caught in barbed wire fences reflected feelings of pain and loss.

“The bags reminded me of the way a model moves on a set or down a runway,” Bell said.

Bell said that the movement the wind inflicted upon the shredded bags helped him in his newest endeavor of breathing life back into the forgotten and bringing the unseen to the forefront of his photography.

Professor of Photography Gary Colby curated the exhibit. He said that many of the underlying themes of the Carlson Gallery have been this idea of transition, impermanence and moving on.

For Colby, the rather unusual series allowed the opportunity to have a conversation about the photographs and how people interpreted it.

“If they get those underlying themes that’s great and if they don’t it allows us to have a conversation,” Colby said. “You look at the plastic bags and give it more meaning then it actually has and I think that is kind of cool.”

Molly Garry, junior studio art major said that, being from the Midwest, the barren background of Bell’s photos resonated with her.

They reminded her of the openness and emptiness she had experienced herself and could quickly feel the emotions pouring out of his photos, she said.

Elmeera Nosrati, junior business administration major, said she initially interpreted the work to be a reference to the lyric “Do you ever feel like a plastic bag, drifting through the wind?” from Katy Perry’s song “Firework.” She said her interpretation changed when she heard Bell’s meaning behind his work.

“The black and white photos reminded me of life and death and the bags flying in the wind made me think of the lost members of society being pulled away but still trying to find their place,” Nosrati said.

Junior history major Ryan Hoffman was not sure what to make of the photos.

His expectations where limited when he was first exposed to Bell’s exhibit.

At first he saw the barbed wire fences and lacerated bags for what they were, and not what Bell had transformed them into.

However, his understanding quickly changed once he was able to hear from the artist himself the explanation behind such an unusual series.

It was then that Hoffman understood the emotional expression these once seemingly simple photos portrayed.

Like Hoffman, Jeffrey Chun, junior business administration major, found that the story behind the photos were also not what he expected of plastic bags.

“It was his way of saying goodbye to his mother,” Chun said.

Photographing these new surroundings was an important part of a healing process he had to go through.

It was in making the unseen seen that he had found peace, Bell said.

Amanda Romano can be reached at amanda.romano@laverne.edu.