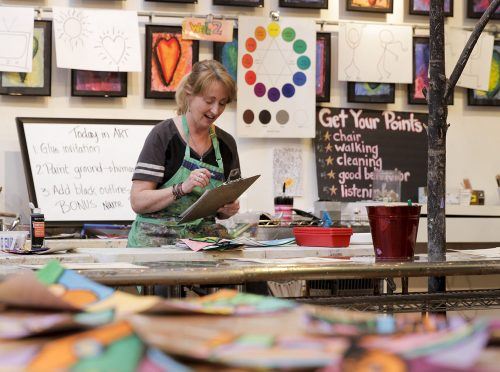 Gabrielle Heide, art instructor and owner of Studio Claremont, prepares for an afternoon art class. The Studio, located in the Claremont Packing House, offers art classes for children focused on the basics of painting, color theory, composition and design. Heide said she loves teaching children because they are open to playing with techniques and less concerned with the final result of their projects. / photo by Spencer Croce

Gabrielle Heide, owner of Studio Claremont, started the business in 2011 in response to the lack of art lessons in California public schools. Heide is a former teacher of the Claremont and Upland Unified School Districts.

“All of our lessons are based on the elements of the principle of design, and we also do some art history related to that,” Heide said.

Students made paintings of hearts and other patterns, to be placed on the art studio walls.

Studio Claremont has sculptures displayed in front of their building that highlight movement and balance.

Each week, the class has a new theme, and the students create a new set of pieces to align with it.

One set, on display the last week of March called “Imagine Peace,” was inspired by the angst surrounding current events.

“We talk a lot about how different artists approach things differently, and how you can say how you’re feeling through your art whether that may be music, writing, or photography. Just expressing yourself,” Heide said.

“We haven’t done a show like this one where it’s so focused on peace, because there is so much tension,” Heide said.

Heide said she does not talk to the kids about current political events, but the students are the ones who brought the ideas forward.

She took on more responsibilities after she graduated high school.

“I’ve grown up here since we started, so it’s been a great process for me to see the studio grow and see all the different kids that we have through the years that we’ve been here. It’s exciting,” Jackie Heide said.

Heide said that seeing the way the children light up with creativity has always reinforced her passion, and that she might decide to pursue a career in teaching art.

Elena Ressel, senior at Claremont High School, said she looks to art as a stress reliever.

“It kinda forces you to recognize that things aren’t gonna be perfect, because you’re gonna make something and it won’t turn out how you want it to turn out, and you’re going to have to deal with that and make it something that you’re proud of,” Ressel said.

Ressel started taking lessons at Studio Claremont when she was about 6 years old.

She is now 18 and is considered an independent student, meaning she comes into the art classes at during regular studio class times, but does her own art work on the side.

“I’m essentially just using the studio for space, and they’ll display my work for a show if I want them to,” Ressel said.

While in the studio, Ressel spends her time working on various kinds of projects with the material she needs available in the Studio.

Ressel said she was influenced by her aunt, who was an artist, and her family members who would buy her art supplies.

Another art student, 11-year-old Jessica McVay, stated that she enjoys being taught by Heide and her daughter.

McVay said she loves that art helps her express her feelings. Her mom is a graphic designer and her uncle is an artist. She said both her mom and uncle are her inspiration and her mom pushes her to do her best.

“I would like to be an artist like my uncle, and work for a big brand,” McVay said.

Studio Claremont offers elementary art on Tuesdays through Saturdays, arts for teens and tweens on Tuesdays and Thursdays, and classes for little artists on Saturdays.