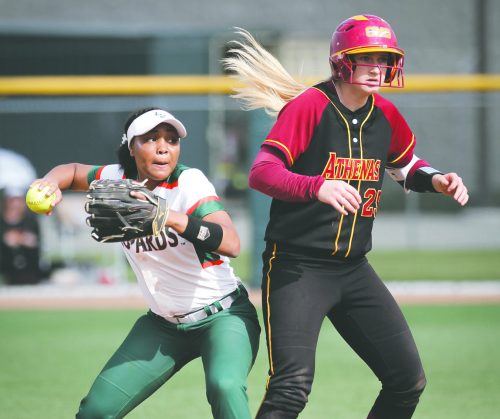 The softball team split a doubleheader against Claremont-Mudd-Scripps Saturday at Campus West, winning the first game, 5-3, and dropping the second, 3-0, in its Southern California Intercollegiate Athletic Conference opener.

The Athenas opened with a double to start the game and got a single to put runners on first and third with one out in the top of the first inning.

With one swing of the bat, senior shortstop Carly Roleder put the Athenas up three runs.

“I think we were a little high after that first game,” head coach Julie Smith said. “It is the first conference game with a new team, we need to stick with the process. Today was about learning.”

Freshman pitcher Jiana Rojo came into the game in relief of starter Katheryn Navarro after the three-run first inning. She held CMS scoreless for five-plus innings and settled things down.

“Most of my pitches were working,” Rojo said. “My screw ball and drop curve were working the best, also being able to hit the corners of the plate.”

La Verne had opportunities to score in multiple innings, but could not take advantage.

In the bottom of the first inning, junior center fielder Carly Condon led off with a walk. With a sacrifice bunt by junior second baseman Michelle Deguzman, Condon was able to get into scoring position.

Shortstop Shelby Tevis flied out to center field, and allowed Condon to get to third with two outs. A grounder to first ended the inning and scoring threat.

After a quick top of the second inning, junior catcher Melissa Garcia nearly got the team on the board when she led off the bottom of the second with a deep double off the top of the fence in left field.

The Leopards could not cash in the good start to the inning, following the double with three straight outs.

“We could not really piece hits together,” Deguzman said. “Beating them in game one with their best pitcher was huge, and I think in game two we were a little more relaxed.”

The Leopards’ bats would not wake up, managing just two more hits, even as La Verne’s pitchers held CMS scoreless for the rest of the game.

“We have the talent and drive to beat any team and pitcher,” Condon said. “We need to focus on our hitting and step up when a teammate may not have a great at-bat.”

In game one, the Leopards were in a similar spot, trailing late in the game 3-0.

In the bottom of the sixth inning, the bases were loaded and Tevis singled in a run to get the scoring started.

After a sacrifice fly, the score was 3-2, and Garcia came to the plate with two on and two out. Garcia took a pitch and drove it over the left field fence, giving the Leopards a 5-3 lead.

Rojo got the final three outs and La Verne completed the come-from-behind victory to earn their first conference win of the season.

La Verne moved to 4-3 overall and 1-1 in the SCIAC. The Leopards will continue conference play at Chapman at noon Saturday.