By Arturo Gomez Molina, Spencer Croce on November 3, 2017 in News 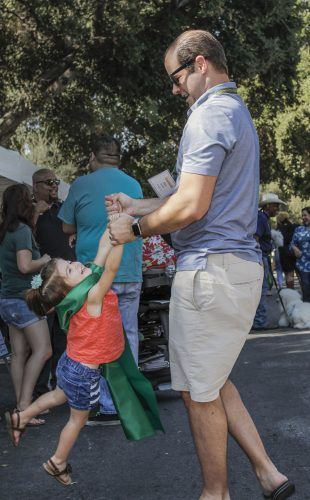 Third Street in La Verne is usually loaded with parked cars, students crossing from the dorms to Davenport Dining Hall and patrols by the La Verne Police Department and Campus Safety.

On Saturday, however, it was transformed into a Marvelous street fair and tailgate party for Homecoming.

Campus clubs, organizations and a few local businesses set up booths all along Third Street leading to Ortmayer Stadium. This year’s Homecoming theme was “Homecoming of Heroes,” making all the booths decorated with Marvel superheroes and characters.

“It is really fun to be back and seeing a lot of familiar faces,” alumna Tiffany Hicks said. “The activities of the street fair were really fun and I am really hoping to grab a new sweater at the bookstore before I leave.”

Hicks said she was also looking forward to cheering on her old roommate, senior defensive lineman Dalton Johnson, in the football game against the Claremont-Mudd-Scripps.

The Campus Activity Board had an entire week’s worth of activities planned, including archery tag, laser tag, a velcro wall and a pep rally leading up to the day of Homecoming.

Students were given stamp cards a week prior to Homecoming and with each CAB event they attended, a stamp was given.

Once the card was filled up, students could enter their stamp cards at the Associated Students of the University of La Verne booth at the street for a chance to win prizes.

The street fair ended with a parade down Third Street lead by ULV President Devorah Lieberman.

The ULV Band and a string of wagons that served as parade floats followed Lieberman down to the street.

“The environment and energy is really great out here,” band director Josh Williams said. “The band is making some noise, the parade is happening and everyone is having such a great time.”

Williams said he looked forward to all the noise and excitement the band would bring to the Homecoming football game in the evening.

Down in the parking lot of Ortmayer Stadium, the tailgate partying was in full effect with music from alum DJ Santana and cars filling every space.

Spaces were reserved for $25 each by parents, sororities, faculty and a popular Los Angeles hip hop radio station.

“We’ll be giving out t-shirts and some station stickers to lucky students who can answer some trivia questions about KDAY artist,” promo crew member for 92.3 F.M, Gina Alexandra, said.

“We really hope everybody has a good time out here today, and that they stay hydrated through this heat,” she said.

The University is a dry campus, but was a bit more lenient for Homecoming. Anyone who purchased a space at the tailgate party also had the chance to purchase a permit to consume alcohol.

Campus Safety had several officers patrolling the parking lot, making sure everything was going smoothly.

“Anyone who has received an alcohol permit today is only allowed to have beer and wine,” lead Campus Safety officer Jerry Espinoza said. “We understand it is Homecoming and we want everyone to have a good time, but we want them to do it responsibly.”

Espinoza said they had not had any problems leading up to the tailgate party and they did not anticipate to have any incidents at the party.

The tailgate party wrapped around 5 p.m. and fans and supporters began to fill the stands for the Homecoming football game.

La Verne went on to lose the Homecoming game 17-7 to the Claremont-Mudd-Scripps.