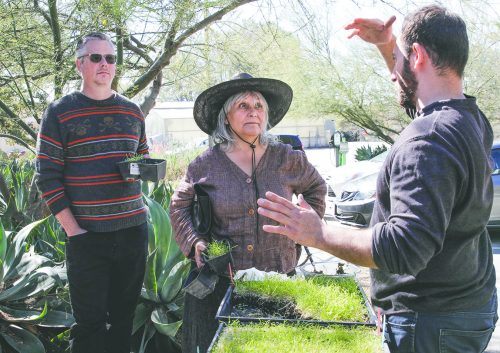 Horticulture educator Eli Feldman teaches Shawn and Deborah Taylor how to care for and prepare miner’s lettuce and stinging nettle as table-ready garden crops Saturday at Rancho Santa Ana Botanic Garden in Claremont. The Taylors drove from Banning to attend the workshop focused on cultivating California native plants after re-landscaping their property using all California native plants, especially edible ones. The workshop offered an overview of California natives including elderberries, white sage and holly berries, which were traditional food sources for Native American populations./ photo by Spencer Croce

Eli Feldman, horticulturist and educator, led the workshop “Grow our Future,” on how to cultivate California native plants Saturday at the Rancho Santa Ana Botanic Garden in Claremont.

About 25 people attended the class, which featured a slide show and also offered samples of native plants to taste and smell.

“This … is a great way to inspire people who are thinking about starting their own home garden,” said Yuwen Wang, a Diamond Bar High School student who attended the workshop.

Feldman elaborated on the slide show presentation by sharing his own experiences working with the various native plants.

Some plants grow better in the ground and others in pots or trays.

Space, water and sun exposure should always be considered when deciding among these, he said.
White sage, for example, does better in the ground than a pot.

A plant as common as raw rhubarb contains poisonous substances, but once it is cooked, it can be the key ingredient in a rhubarb pie, Feldman said.

She said she enjoyed it so much, she plans to attend more in future.

And Clark said she plans to make soda through the fermentation method Feldman included in the workshop discussion.

Clark said that she will be on the lookout for elderberries and holly berries for a tea.