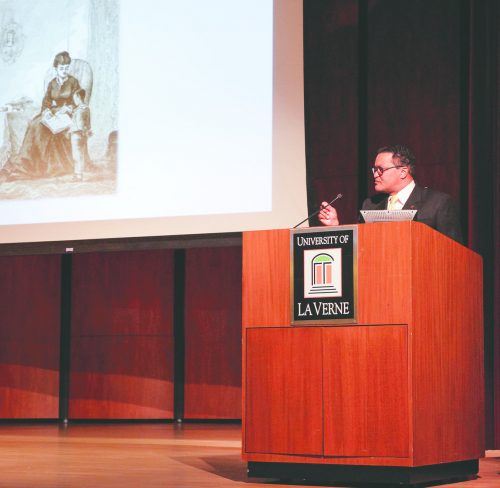 Kenneth B. Morris Jr., founder and president of the Fredrick Douglass Family Initiatives, speaks at the 2018 Fredrick Douglass Human Rights Lecture Monday. Morris is a direct descendant of Douglass and Booker T. Washington. Using Douglass’ life as an example, Morris emphasized the importance of education and how it made Douglass “unfit to be a slave.” The Frederick Douglass Family Initiatives seeks to end human trafficking through education and awareness. They donated five books to students for every book sold at the lecture. / photo by Spencer Croce

“There is still a need for abolitionists,” Morris said. He added that sex and labor trafficking exploits the most vulnerable women and children.

There is no difference between African slavery and modern slavery, Morris said.

He added that people would not wear a shirt made of cotton picked by an African slave, but do not think twice about buying items made by children who lose that job as soon as their size no longer benefits it.

In order to inspire and prepare young abolitionists and educators, the organization is giving away one million copies of the bicentennial edition of Narrative of the Life of Frederick Douglass, and American Slave, to youth at schools across the nation. Copies were sold before and after the lecture – for every book sold for $20, five books can be given to students. Morris has traveled to schools across the nation to personally equip them with their first tool in the process to build a better community in this nation.

“Every step black people and other marginalized groups make, its like we always get a push back,” graduate student of social justice and higher education Jasmine Marchbanks-Owens said. “The push back creates a lot of innovation but we still hit a wall.”

“My degree is written on my back,” Morris repeated of Frederick Douglass.

Douglass taught himself to read and write after being forbidden further lessons from his master’s wife in Baltimore where there were free blacks because proper education would make him ‘unfit to be a slave.’ As he began his work as a journalist and abolitionist, no one believed that he could have ever been enslaved.

“God answered my prayers when I prayed with my legs,” Morris said of Douglass.

Little did he know he was also referring to someone who would become family when Frederick Douglass III and Nettie Hancock Washington married in 1941.

At 16 years old, Booker T. Washington walked 500 miles to Hampton Institute in Virginia, now Hampton University, when he learned there was a place he could go to fulfill his educational goals.

After being turned away twice, he proved his place at the school by cleaning an entire room, earning him a janitorial job to pay his tuition. He went on to build Tuskegee University from the ground up, which is now a historically black college.

“Most interpretations of freedom are having the right to do with what you have, Morris’ definition seems like more liberation from the system of oppression,” senior political science major Paris Patterson said.

Morris received his bachelor’s degree in religion in January through Richard Rose, professor of philosophy and religion.

“History lives in each of us,” Morris said. He left the audience with the notion that just because everyone is not related to a well known figure, does not mean there is not the blood of someone who dedicated their lives to make a difference in our veins.