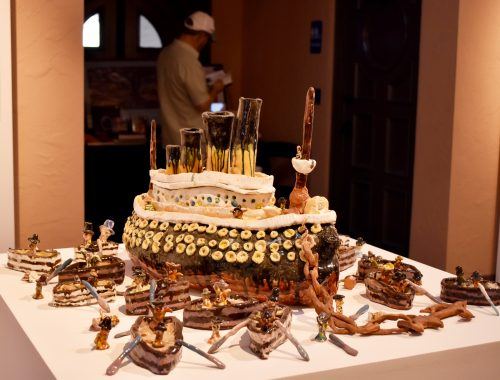 An untitled ceramic piece created by an unidentified former student of the Tierra del Sol Foundation features a steamboat surrounded by life boats. This piece is featured in the “Vanguard: Origins of Tierra del Sol”exhibit and will be open from noon to 4 p.m. Fridays to Sundays at the Claremont Museum of Art. / photo by Liliana Castañeda

The Claremont Museum of Art is displaying the art of Helen Rae and her students, who are disabled, and found an outlet in creating art through the organization Tierra del Sol.

The exhibit, “Vanguard: Origins of Tierra del Sol,” displays work from Claremont artists involved in Tierra del Sol, as well as some of Rae’s most recent work.

“My favorite piece felt like it was different as far as it being dated because it was a little funky, like the ‘70s,” said Timothy Ramos from Azusa. “The colors were a bit faded as well, not much saturation, and a bit of grainy-ness to it like in movies.”

The art piece Ramos described was one by artist Helen Rae in which a man wearing a jean jacket and jeans with long hair stood in the frame as if posing for the artist with one hand in his pants pocket, leaning his side to a wall.

His face was distorted in a way where it still seemed human yet strange enough to appear alien.

“I think Helen Rae is trying to say that beauty comes in all shapes, by doing that she’s shifting perspectives into beautifying individuals,” said Itzia Herrera from Ontario.

Rae created her art based on covers of fashion magazines, but instead of the clear shapes and soft tones magazines emulate, she created her models with harsh geometrical edges; further drawing attention to every unique feature of the character.

“I think the colors had a sort of representation of the feelings involved with the art,” said Islene Mancinas of Upland.

Various pieces featured, including those of Helen Rae, all portrayed common features like disproportionate body parts.

Hands too large, or heads too small in equivalence to the rest of the body similar to that of Picasso’s style of distorted human forms were present.

A piece by John Boxer, an artist from the Tierra del Sol foundation, featured three main characters centered in front of what appeared to be a church or monastery, with one character dressed like a monk.

The characters all had similar facial features that were exaggerated and enlarged.

The building behind them was made up of geometrical shapes that were stacked upon one another, making it look like a house made of children’s toy blocks.

“The way I interpreted the art was sort of like a visual representation of what they are,” said Sarah Ramos of Azusa.

Tierra del Sol is a foundation for people who have physical or intellectual challenges and wish to pursue a career in the arts.

The foundation teaches its students develop a portfolio and resume while giving them the opportunity to display their art in exhibits.

“It’s wonderful for anybody to do it. I’m sure at least at some time some people might’ve thought they were scuffled but now art can be life-changing for them,” said John Simmons, an Upland photographer.

Rae, an internationally renowned local Claremont artist, has been partnered with Tierra del Sol for about 30 years. She was one of the artists who founded the organization.
The exhibition runs through April 11. Gallery hours are noon to 4 p.m. from Friday to Sunday.

Enoch puts Leopards on his back against Panthers
Softball sweeps, starts season 6-0