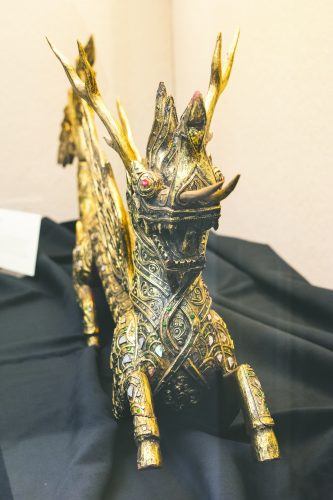 The “Gods and Monsters” exhibit at the Petterson Museum of Intercultural Art showcases artifacts from around the world. This, the Phaya Naga, is from Thailand. / photo by Maydeen Merino

The Petterson Museum of Intercultural Art at Pilgrim Place is hosting an exhibit titled “Gods and Monsters.”

The exhibit displays a contrast between the numerous ancient, and some modern, cultures and their individual portrayals of mythical creatures and gods through the various artifacts representing their culture.

“They are very expressive, very exaggerated, like the teeth on the masks and the ears, and the eyes. The ears are big and the eyes are bulging,” said Jackie Delgado, Cal Poly business major. “They are very dream like, they are not realistic at all. It seemed like they could be part of your nightmares, or even hallucinations.”

There were various masks throughout the exhibit; in most cultures, masks symbolize the embodiment of a creature or god, serving as a form of protection from evil energy or spirits for whoever wore it.

“The art seemed demonic to me, it felt like the devil was involved,” Jackie Diaz, Citrus College dental hygiene major, said. “They were scary, I might have nightmares tonight. They looked like artifacts used in tribal rituals.”

Many of the artifacts were from various cultures around the world such as Indonesia, India, Mexico, Nepal, Tibet, China, Thailand and Japan. However, most of the works consisted of Indonesian masks and sculptures.

One piece that stood out was the Cuadro from Mexico. It was created by a tribal group still present today, the Huicholes.

The tribe would smoke peyote when they wanted to communicate with their gods and then draw what they experienced while under the hallucinogen out of yarn on a square.

It was vibrant and full of movement due to the yarn that was continuous and did not stop, almost as if it were made with only one string.

They depicted gods as relaxed and graceful, celebrating apparent festivities while the monsters were portrayed as far more sinister, with exaggerated features that could intimidate anyone.

“I think it’s interesting that these pieces have been here for such a long time, since Hannibal Barca, a man who was thought to be the thunder god but in reality he was mortal, like the rest of us,” Anne Rowe, museum assistant, said. “His idea was not to harm people but to expand territory and have people join his army if they wanted to, this reminded me of the Indian pieces because he utilized elephants in war.”

An Indonesian mask from the 1900s called “The Bhoma” depicted a colorful creature with bulging eyes, a bulbous nose and fangs almost the size of a wild felines.

“I feel like the Bhoma mask is more intimidating than how everyone else would perceive the devil,” Frankie Campas, psychology major at Citrus College, said. “There are different perspectives of what evil is and I think that’s very interesting because some have untamed hair, huge hands, etc., what is usually considered scary.”

It had huge ears like an elf, pointed up and disproportionately, a curly beard framing its face, and nails showing the creature needed a trip to the salon very soon.

The Bhoma is the son of Dewa Wisnu and Dewi Pertiwi, the god of rain and the goddess of earth., hence the vegetation seen surrounding the creature when looking at the mask.

The exhibit will be open Friday through Sunday from 2 p.m. to 4 p.m.

Liliana Castaneda can be reached at liliana.castaneda@laverne.edu.