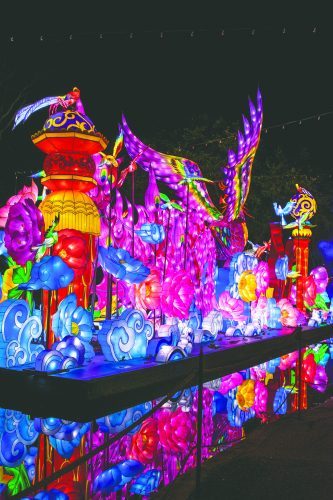 The Chinese Lantern Festival provides an array of Chinese lanterns, food, music and entertainment at the Fairplex. The festival runs until Jan. 5. / photo by Maydeen Merino.

The entrance gates lead to two pathways and several arches displaying luminescent flowers that illuminated the path leading to peacock-themed lanterns at the base of even more floral arches that were connected with vibrant purple Christmas lights hanging above.

There were also several giant illuminated flowers on the outskirts of the path, including cherry blossom trees and buttercups.

“I really like the moving animals aspect of the event. I think the Chinese people are a very bright and happy people, or their culture because of the lights and the colorful environment,” said Claudia Rodrigues, a visitor from Baldwin Park.

There were different themed displays ranging from holiday festivities like Santa Claus and his reindeer-pulled sled to different environmental displays such as the deserts and jungles.

Some of these displays included animatronic animals, one of which was a large snake that hung from an arch at the entrance to the jungle themed display.

Children were kept entertained with lily pads that would light up when stepped on, the colors changing from a dull green to a colorful rainbow-esque pattern resembling the Target logo when stepped on.

The scenes appeared as though they could have been pulled directly from the film “Alice in Wonderland.”

Mechanical dragons moved their necks and wings as they were available for children ages 4 to 12 to ride and take pictures with. Although the dragons were stationary, they were tall enough for the children to need a built-in staircase to get to the top of the their backs.

“The porcelain dragon is pretty amazing and the entrance is pretty cool too. We’re actually going to bring my family next week, but I do think that maybe they should expand it. Kind of a shame that there is not that many people here as we were expecting,” said Sandra Hernandez, a La Puente visitor.

A dragon half the size of a football field and about as tall as a two story structure gave off a blue glow with a soft sheen.

Under closer inspection, the massive dragon was made up of plates in the shape of scales, as opposed to the other lit up displays that consisted of a much more solid material.

When it came to the more cylindrical areas, such as the tail, the dragon featured teacups alongside the plates.

“I think it’s important that we share this art form. Chinese folk art is in danger of being lost and I think this brings awareness,” said Zhang Fez Chang, a Chinese folk artisan and vendor who creates sculptures, figurines and lollipops out of sugar.

There were also performances showcasing the Chinese culture through music and dance.

One group performing consisted of all female musicians draped in traditional Chinese dresses in a uniform shape that flowed straight down.

The women played music with traditional Chinese instruments, including the yangqin, which carried that recognizable high-pitched, quick-paced melody that sounds like a softer, more gentle version of the xylophone.

They integrated western culture by playing the “Game of Thrones” theme song which made the crowd explode in cheers as soon as the first chord struck.

“We liked it but we probably won’t come again because it’s those types of things that you experience once and then that’s it. Now we got to go to China and get the real experience,” said Walter Howell, a San Fernando Valley visitor.

The Chinese Lantern Festival is open through Jan. 5, Thursday through Sunday from 5 p.m. to 10 p.m., with the latest admission at 9:20 p.m. every night.