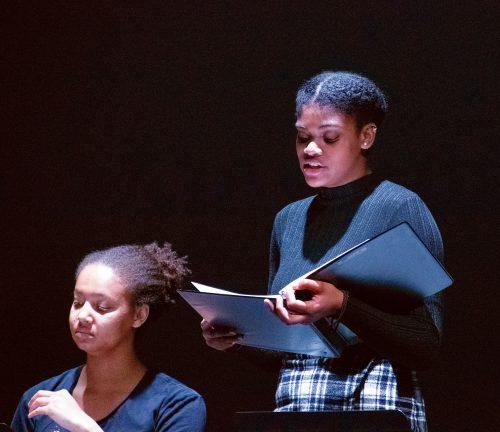 Jasmine Scott, junior creative writing major, and Shy Glothon, junior theater arts and psychology major, perform in the staged reading of Toni Morrison’s “The Bluest Eye,” which focuses on the lack of media representation of African American women and how it affects their self-esteem. / photo by Liliana Castañeda

Toni Morrison’s novel “The Bluest Eye” was given a breath of new life through the staged reading presented by the theater department and the Center for Multicultural Services Feb. 27 in the Dailey Theatre in celebration of Black History Month.

Morrison’s novel explored the racial bias towards white features and the lack of representation of black women in the media.

“She is speaking about things that the African American community is aware of, I’m going to say viscerally, if not personally but through history, through what’s been passed down, through things that they’ve assimilated, through media,” said Alma Martinez, the production director. “It’s there and she’s saying it ‘cause no one had said it as clearly and beautifully as she did: Toni Morrison.”

In one instance of the reading one of the characters that was African American named Claudia was destroying her white doll describing every moment in which she tore something off the doll.

The stitches torn, the eyes plucked, the clothes ripped off – as she described the chaos, she also justified the reason why she did it.

“Because there is a lack of representation of African Americans in social media especially when she wrote this, the only images they have are white images, and all they can do, people growing up, is look at white images and say well I guess that’s what I’m supposed to be, and so they want to aspire to that, but the reality is they don’t,” Martinez said.

Even having been financially strained and not able to afford toys, Claudia decided to rip the doll apart when that was the type of doll that most girls wanted.

Claudia did not want to have a doll that reminded her of everything she did not have, the white skin, the small nose, the blue eyes, and the people who did have those features would not see her as beautiful as she saw them.

They saw her as ugly.

“Being black at that time, they are already known as something and they had to deal with that and unresolved problems of their own, and I think it all piled up,” said Carmen Bond, cast member and sophomore education major. “That’s always an underlying thought for them you know about how they don’t feel good enough and compared to white celebrities.”

Pecola, an African American character, wanted to have the bluest of eyes because she thought that if she had a more desired physical feature people would find more value in her, and finally treat her better.

At one point in the reading she even approaches a man believed to make miracles,that goes by the name of Soaphead, to change her eyes into blue ones.

The man himself felt outraged that Pecola felt ugly because she was black.

The reading delved further into the topic of misrepresentation of black women in the media by including a real life child star called Shirley Temple, who was the epitome of the perfect poster child of that time. She had the blonde curls, freckles and light skin that Claudia’s doll had.

“That color complex, that lighter is better, is literally everywhere that has been colonized,” said Associate Director of Multicultural Affairs Misty Levingston, a cast member who played Claudia’s mother.

The example of racially charged beauty standards in the world cemented the concept.

“I feel like the stage not having props and sets, made the experience of the characters a little more real. You can hear the tones and the emotions of the actors,” said Andres Avila, 2019 University of La Verne graduate.

“We are not getting the positive images that reinforce the magnificence of our cultures, they’re not in the books yet, and that’s what the department is trying to do, get more representation,” Martinez said.