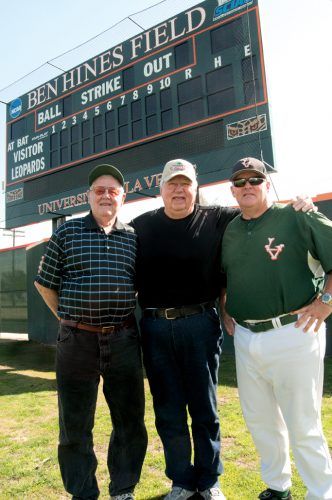 He led the Leopards to an NAIA title in 1972, the first national championship for La Verne in any sport. He also earned a World Series ring with the Dodgers. The Leopards’ home field was named Ben Hines Field in his honor in 1989.

Mr. Hines was raised in McFarland, California, and enrolled at La Verne College in the mid 1950s. He was a three-sport athlete in college, playing baseball, football and basketball.

After graduating in 1958 Mr. Hines was signed by the Baltimore Orioles as a catcher and infielder. Following a brief minor league stint, he returned to La Verne as a baseball coach in 1960. During his coaching years, Mr. Hines won more than 500 games and took the Leopards to the playoffs every year from 1968 until his departure in 1980.

Mr. Hines took his Leopard teams to the NAIA World Series five times and won the national title in 1972. He led La Verne to eight Southern California Intercollegiate Athletic Conference titles, including five straight from 1976 to1980, and was named Coach of the Year in 1977.

In all, Mr. Hines coached 63 Leopards who went on to play professionally, including eight future Major League players and one future Major League manager. Most notable was three-time All-Star Dan Quisenberry, who helped lead the Kansas City Royals to their first World Series championship.

After his departure from the University of La Verne in 1980, Mr. Hines served as an assistant baseball coach at Arizona State University for three years. In 1983, Hines made it into the big leagues hitting coach for the Seattle Mariners. He moved on to the Dodgers from 1985-1986 and 1988-1993, serving as hitting coach and first base coach and helped the Dodgers win a World Series in 1988. During his time as a coach, Mr. Hines wrote a book called “The Swing’s the Thing” which discusses baseball, hitting and swinging levels.

He continued to stay active with the La Verne baseball team up until his death.

“I remember the days Hines and I would go down to the field and talk about baseball and how hitting levels are important,” current baseball head coach Scott Winterburn said.

Winterburn said he admired Ben Hines because he was a gracious person who never forgot his roots.

“We should all aspire to be Ben. A guy who does his life but always goes back to his roots, and hopefully I can do the same one day,” Winterburn said.

University of La Verne faculty and staff members will never forget Ben Hines. Professor of Humanities Al Clark had the chance to interview Mr. Hines previously. Clark would meet with Hines when he was in the city or just visiting.

The La Verne baseball field, which was named after him in 1989, was built by him and his players back in the 1970s. Mr. Hines dug trenches for the wires and made the dugout for the team. The field sat at the current site of the Abraham Campus Center and was moved to its current location at Campus West in 2011.

Mr. Hines was a competitor, he loved to win and that made it harder for his opponents to beat him, said Professor of Humanities Al Clark, who interviewed Hines for the University of La Verne oral history project.

“Hines created a system where a coach must recruit good players to see a good outcome,” Clark said.

Clark says that Mr. Hines encouraged other coaches to recruit and find good players to bring back to their teams, in hope of winning a championship. Clark said he hopes La Verne will remember him as a committed coach, hardworking faculty member and caring mentor.

Mr. Hines is survived by his wife, Wanda and his three children Steve, Bruce, and Kristi.

Bruce Hines, who played for his father at La Verne and has coached throughout the major and minor leagues, will join the Los Angeles Angels as first base and outfield coach for the 2021 season.