By Campus Times Editorial Board, Christian A. Lopez on May 10, 2002 in Editorials, Opinions 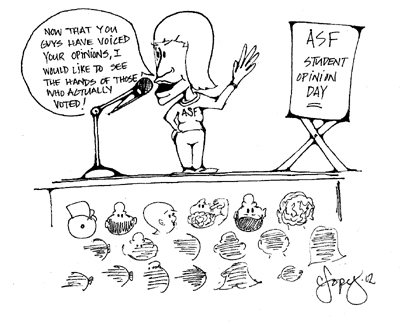 The race for next year’s Associated Student Federation (ASF) Forum started a couple of weeks ago, and yet the student body (meaning everyone else, not on ASF)-does not seem to notice or even care.

Is it that the flyers posted around campus are not big enough? (There is a rather large poster hanging on the Oaks F building). Or, is it that the flyers being passed out are not attractive enough? (One flyer used P. Diddy’s song as a campaign slogan.) Perhaps, to put it plainly, the student apathy displayed toward ULV’s student government is due to the numerous mistakes ASF has carried out in the past.

Last year it was proven that ASF elections were tainted. The voting, that students had taken the time to do, was actually tampered with.

This year, the voting process was postponed due to some discrepancies. Perhaps, this was done because some students were influenced on how to vote. (How would you like having someone over your shoulder telling you who to vote for?) What is ASF trying to prove? Are the opinions of the student body not as important as their own?

They have already proven this with the agenda they choose to honor. It is great that ASF allocates funds to send rowdy rooters to cheer for our teams out of state, but is that money really worth giving when so many other clubs and organizations on campus are somewhat underfunded?

What about all of the other activities that could be done, like dances and sporting events that students only get to participate in whenever ASF decides to host a free event? Also, why not make some lasting, meaningful purchases for ULV?

Shouldn’t the students decide for themselves what organizations or programs they wish to fund? They after all, spend all student activity fees every year, just for that purpose. It is not fair then that ASF’s election goes by rather unadvertised and uncontested. The students do not seem to care about ASF because their decisions do not seem to include us. For example, the current ASF president will be in power for another term without any contest. And most ASF members are also running uncontested.

Basically the ASF elections have become an inside race-shutting the student body they are supposedly representing outside of their walls. And when the students do choose to run or vote, they are influenced to do otherwise. It’s like a big popularity race then, with only those in ASF yielding the power.

Based on these facts, is it not clear, how unfair this whole election is? Although the students are somewhat at fault for not running, who could blame them?

What are the chances of an outside student winning, when only those in ASF seem to know what’s going on? Perhaps the student body has let ASF get away with too many things already. For years, their decisions have withstood without argument. Maybe it is because their public has continually gone through their college education without notice-without information.

ASF might argue that it should be up to the students to show interest and to attend their meetings. How open are their meetings anyway? And for that matter, how available are they to talk to the students? It is funny to think that in order for a candidate to win, they need 75 votes. How is ASF going to get these 75 votes when most of the candidates are running in uncontested elections?

What happens then if the 75 votes do not come? Is the candidate unanimously voted in? ( Of course that would be the expected ASF decision).

The lack of candidates may cause ASF to hold another election in the fall. However, this time, only those in ASF will vote on who they let in.

Such an action should cause students to find it within themselves to start making a statement on campus. Maybe in this election, we will not know who we are voting for, but at least we made an effort to vote. There is always a next time – and that would be the time to have a voice in the government – a voice that could make students care about what is going on within their university.