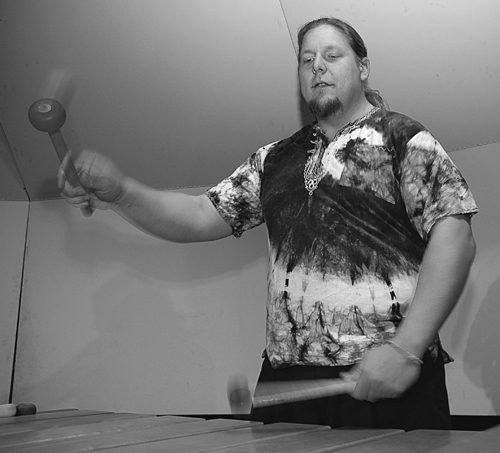 Playing the marimba, Scott Murphy of the Masanga Marimba Ensemble has been a member of the ensemble since it started as a class five years ago at Cal State Northridge. The group plays music from the Shona people of Zimbabwe, much of which is centuries old and passed down through oral tradition. / photo by Jenna Campbell

Attendees of Tuesday night’s concert in Founders Auditorium were treated to the energy and rhythm of African tribal music, courtesy of the Masanga Marimba Ensemble.

The group, led by Cal State Northridge professor and ethnomusicologist Ric Alviso, was formed in 2000 and has performed at numerous venues throughout Southern California. Each band member was originally a student in one of Alviso’s classes. The ensemble specializes in playing the music of the Shona people of Zimbabwe.

“My interest in African music helped me better understand American pop music,” Alviso said when explaining the origins of this passion. Alviso added that his trips to Senegal and Zimbabwe only deepened his enthusiasm for this unique genre of music.

Though the concert itself began about 10 minutes late, that deviation from the schedule did not seem to dampen the enthusiasm of either the 10 band members or the 40 or so people in the audience.

After a couple notes of the first song it became clear that this performance would be something extraordinary. The sheer virtuosity and energy exhibited not just by the performers but by the songs themselves was simply indescribable.

The majority of the instruments used were marimbas, hence the group’s name. Marimbas are like large wooden xylophones, but because of the materials used in their construction they sound a lot less metallic and mechanical.

In addition to the marimbas, the band also used mbiras, which are strips of metal attached to a wooden base, and the performer plucks the metal strips to make the notes; think of it as a manually operated music box. Other instruments included rattles made out of gourds, a cowbell and a set of modern drums.

Vocals were also part of many of the songs, and those vocals were delivered just as brilliantly as the notes from the instruments.

Remarkably, the individual performers alternated between instruments almost regularly from song to song. Even more remarkable was the fact that they were able to play each one so well.

But perhaps the most memorable pieces of the night were the ones that involved audience participation. One of the first songs of the evening involved the audience singing along during the chorus of “Marenje.” The chorus featured the word “mauya,” which is the Shona word for “welcome.” Another song, entitled “Shakanaka,” featured a finale in which audience members were invited in front of the stage to participate in a dance to accompany the song.

After the concert, the audience members were invited onto the stage to try out the instruments for themselves, ask the musicians questions, or purchase copies of the band’s latest CD.

Even though the attendance figures were not exactly spectacular, those that were in attendance all seemed to enjoy the evening immensely.

“It was real good,” said senior music major Derek Wendt. “It was my kind of music.”

Yet despite the glowing reviews, Alviso said he would be satisfied if the audience only took home one thing from this event.

“I want them to leave with a more open mind toward other cultures,” Alviso said.