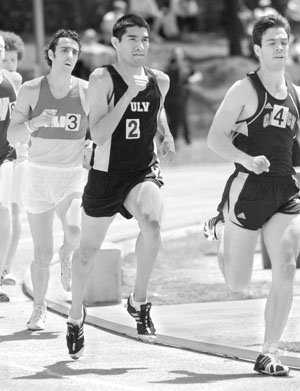 Shortly after the start of the 1,500 meter run, La Verne runner Efrain Partida drafted behind a runner from Cal Tech. Partida placed fourth place in the race, with a time of 4:01.55. The SCIAC Multi-Dual track meet was held April 15 at the Strehle Track in Claremont. / photo by Leah Heagy

As the Southern California Intercollegiate Athletic Conference championships draw closer, the Leopards track and field team tuned up this weekend at the SCIAC Multi-Dual track meet in Claremont.

For the men’s side, captain Darnell Gilbert continued to lead the team by placing first in the 200 meters with a time of 21.93.

“This weekend I was pleased with the team’s performance,” Gilbert said. “The freshmen stepped up and made an impact.”

“Individually I was happy with my 200 meter time. It’s getting near the time of the season where I will peak so I’m fine tuning my form,” Gilbert added.

Other outstanding performances on the men’s side include Efrain Partida, Griffiths, Carrington and Jon Virgin.

Griffiths, who is working on improving his time in the 800 meters, is ultimately preparing for the 400 meters, and placed fifth with a time of 1.59 which was better than his mark two weeks ago.

“There is definite room for improvement,” said Griffiths.

“As the week progresses and we work on stick passes we should improve and come out on top in the SCIAC championships,” Griffiths said.

Carrington placed third in the 110 meter hurdles with a time of 16.07.

Off the track, Virgin placed third in the hammer with a distance of 45.01 meters.

Off the track, the women’s side is looking stronger.

Constance Mayaki placed high this weekend in the hammer throw and shot put.

Also performing well for the women were Antoinette Borders and Chelsea Sherier.

“I was definitely impressed with our up-and-comers like Jasper Chang for the 3,000 meters and our 4×100 team,” Widolff said. “We are definitely peaking at the right time and should definitely show well at the SCIAC championships.”

The track and field team will compete in the SCIAC championships in Whittier on April 28.

Lauren Reed can be reached at lreed@ulv.edu.