By Jennifer Kitzmann, Rhiannon Mim on February 22, 2008 in News 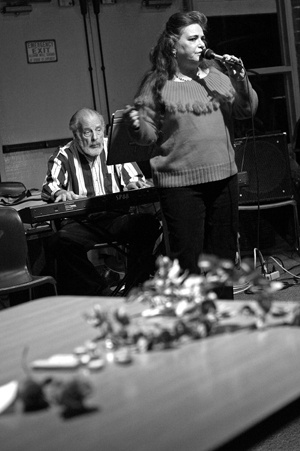 The first speed dating event sponsored by the Campus Activities Board was held in Davenport Dining Hall last Wednesday. The Jazz Standards, a local jazz band, performed with keyboardist Harry Ragland and vocalist Judy McCord. The band has been together for eight years and this was the first time they had ever played at a college campus. / photo by Rhiannon Mim

Speed dating has become a popular trend over the years – a way for men and women to meet briefly face-to-face before deciding on a second date.

It is a simple and fun experience.

The day before Valentine’s Day, the Campus Activities Board hosted the University’s first ever speed dating event at the University of La Verne.

“I have never been speed dating before but I thought it would be a great event to have here on campus for people to meet,” CAB Concerts Chair Dylan Haro said.

Empty chairs and tables slowly filled as students waited patiently to strike up a conversation with each other.

After five to 10 minutes they would move to the next table to chat with the next potential love interest.

The speed dating event was not as pressured as a typical date and provided students with an opportunity to meet in a fun and safe environment.

According to some students who stopped in to check out the event, the best part of the night was the chocolate covered strawberries and the jazz band.

The band that played at the event, the Jazz Standards, featured lead singer Judy McCord and keyboardist Harry Ragland, who set the scene with jazzy tunes and some romantic ballads.

Even though students did not start to arrive until after 10 p.m., they showed up in waves as men and women came in and out.

There were definitely more guys than girls.

Senior Adam Elmayan said he had never been to a speed dating event before and thought it was definitely better than online dating.

“Online dating is too scary; it is just better to meet the girl in person,” Elmayan said.

Even though some students were not allowed to join the speed dating event because of their boyfriends or girlfriends, they sat outside to enjoy the smooth jazz tunes that lingered outside Davenport.

Some students admitted that they were just not ready to commit to the whole idea of speed dating while others thoroughly enjoyed the event.

“It is good to meet people at events like this,” said junior Wendy Rodriguez.

Rodriguez said that speed dating was a good idea that was fun because it allowed students to come together and hear music.

“It takes a lot for students to come to an event like this. I think some students are a little scared of the speed dating concept,” CAB Chair Michelle Ajemian said.

Although there were still some empty chairs before the night was over, students got to enjoy meeting new people, listen to a little music, indulge in some sweet treats and experience the popular trend of speed dating.

Jennifer Kitzmann can be reached at jkitzmann@ulv.edu.