By Gabriel De Alba, Gabriella Chikhani on November 20, 2015 in News 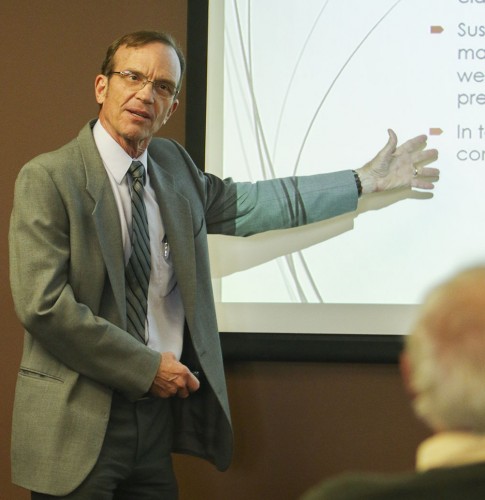 Professor of Humanities Al Clark gives a presentation Tuesday in the President’s Dining Room regarding the San Gabriel Watershed and the effects of global warming. Clark gave brief suggestions on ways to conserve our resources, such as turning the faucet off as we brush our teeth. / photo by Gabriel De Alba

Professor of Humanities Al Clark discussed his upcoming book, “Collapse: Global Warming in Our San Gabriel Watershed,” which focuses on five centuries worth of global warming and its impact on the San Gabriel Valley, Tuesday in the President’s Dining Room.

The 14 chapters in his book detail the climate and economic changes over a 500-year span and how the inhabitants of the San Gabriel area had to adapt over time.

“The planet will survive but the real question is will we survive?” Clark said. “Our lifestyle, who we are as a species, will that survive?”

Clark said collapses in the area began with the disappearance of La Brea’s “Big Animals,” such as mammoths, saber tooth tigers and camels.

He believes the most recent collapse is being caused by a residential watershed.

A watershed was described by Clark as land that water flows from into a common body of water such as a river or a lake.

“Greenhouse gas emissions, drought, rising temperatures–all these changes from the 1880s to 2008 have impacted the San Gabriel Valley in the form of wildfires, and has killed vegetation,” Clark said. “The rising temperatures cause us to use our air conditioning more which creates more electricity use.”

Clark said the drought is not the only reason why California is lacking sufficient water storage.

“The lack of rain is only part of the problem. The other factor is our inability to capture the rainfall before it rolls into the ocean,” Clark said. “Manage­ment of dams is key to water storage and flood control.”

In his book, Clark accounts three events in the year 1776 as the beginning of global warming, because they perpetuated change in America: the development of the steam engine by James Watt, Adam Smith’s “Wealth of Nations,” and the signing of the Declaration of Independence.

“I always thought global warming was a newer idea but I found his point about how it actually started years ago and has developed to be very interesting,” said Delaney Poe, a junior business administration major.

Clark says that no one can reverse the problem, but we can all work towards avoiding another collapse.

“I really liked when he said that humans aren’t destroying the Earth but rather we are destroying our ability to survive, because that is what made the most sense to me,” said Justin Yeh, sophomore economics major. “Humans need to start understanding that we’re moving towards a trend that is saving this Earth and saving ourselves.”

Yeh plans on having a career dealing with solar power energy with companies such as SolarCity that work on developing solar powered batteries that can charge a phone or laptop for up to two months.

“I think the little things like a solar power battery will help, but the reason we hear so much about it – global warming – now is because everyone wants to make money from it,” Yeh said.

Some simple fixes that Clark suggested can help the fight against global warming are walking or biking versus driving, turning off lights or using fewer lights in a room, and utilzing more solar energy.

Stop the spread of Islamophobia
‘Slacktivism’ is ineffective