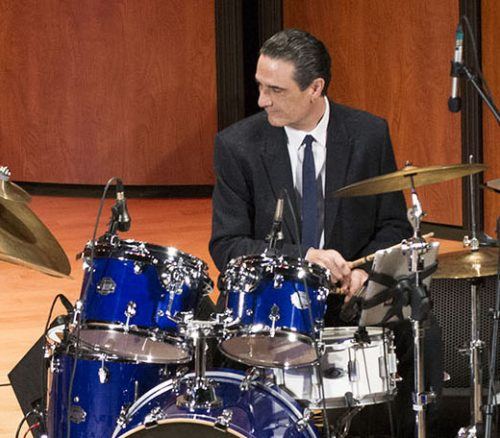 Steve Biondo plays drums in 2014 in Morgan Auditorium with the jazz group OrganiZm. Mr. Biondo died April 13 at the age of 58. A memorial service to remember his life was held on this same stage Wednesday. Students, faculty and friends held a jam session in his honor. / file photo by Julian Burrell

Musicians of all ages filled the Morgan Auditorium stage for a jam session on Wednesday night to honor Steve Biondo, operations manager of the music department and longtime instructor for West African drumming, who died April 13 in his La Verne home at the age of 58.

As a professional musician and recording artist, Mr. Biondo shared his passion for music with the University of La Verne for more than 20 years and helped bring Sundays at the Morgan to life.

“This isn’t goodbye,” said Jon Rothe, University alumnus who spoke at the memorial service before the jam session Wednesday.

“It’s just an extended period between sets, my brother.” Rothe had been friends with Mr. Biondo for 39 years.

Mr. Biondo, born Nov. 14, 1958, found his passion for music at a young age when he and his siblings were introduced to music by their parents. He toured with various drum corps and bands during his young adulthood and joined La Verne’s music department in 1998.

“Losing Steve is like losing a limb. We were roommates, friends and brothers,” said Dave Devlin, who marched with Mr. Biondo in the Anaheim Kingsmen drum and bugle group and had been friends for 42 years.

Mr. Biondo’s love for music influenced his desire to teach the drums, and he created a website that shared tutorials.

“Steve had an attitude about music that inspired,” University Chaplain and long-time friend Zandra Wagoner said. “He never stopped learning his craft and always wanted to improve.”

Mr. Biondo is survived by his son, Brandon, who inherited his father’s love for music.

“The way he approached his craft and looked at life will never be matched,” said Chris Stevens, who performed in the Anaheim Kingsmen with Mr. Biondo.

“He played those drums like they were a grand piano.”

Friends, students and family celebrated Mr. Biondo’s passion for music by placing a variety of drums and instruments on stage.

At the end of the service, Rothe asked those who had performed with Mr. Biondo to come to the stage for a jam session.

“He was patient, driven and he always made sure everyone kept the groove,” said Andrew Medinn, junior music major.

After the jam, Wagoner invited guests to light candles in Fasnacht Court to honor Mr. Biondo.