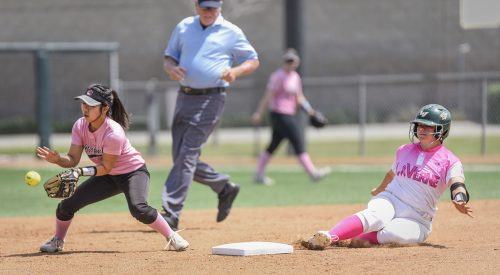 La Verne sophomore first baseman Katheryn Navarro slides safely into second base after hitting a double into left center field to start a fourth inning rally for La Verne against Chapman in game one Saturday. The Leopards swept the Panthers during the Strikeout Cancer Awareness doubleheader at Campus West, 7-2 and 4-3. La Verne is 17-11 overall. / photo by Claudia Ceja

The La Verne softball team capitalized on walks and timely hits to sweep the Chapman Panthers Saturday at Campus West.

The team is now 17-11 overall and 12-4 in the Southern California Intercollegiate Athletic Conference, putting them in second place.

The Leopards partnered with the National Fastpitch Coaches Association to play in honor of Strikeout Cancer, a program that raises awareness and funds to fight the disease. The team also donned custom pink uniforms with pink ribbons on them.

“Our offense was slow to start in the beginning of the season, but I think we’ve really been pulling hits together,” junior second baseman Michelle Deguzman said.

With the bases loaded and two outs in the bottom of the second inning, junior center fielder Carly Condon connected with a line drive cut down right field for a three-run RBI triple for a 3-0 lead.

“The inning was a game changer because we had better discipline in the batter’s box,” Condon said. “The umpires had tight strike zones.”

The Leopards were able to tack on four more runs in the third and sixth with a sacrifice fly, a bases loaded walk and a two-RBI single.

The Leopards entered the fourth inning with the lead, 4-0. Rojo continued to keep the Panthers’ offense quiet.

The Panthers took advantage of the Leopards’ mistakes and scored two unearned runs in the top of the seventh.

The Leopards are back on the field with a doubleheader against the Cal Lutheran Regals Friday. Game one is at 2 p.m., with game two at 4 p.m.