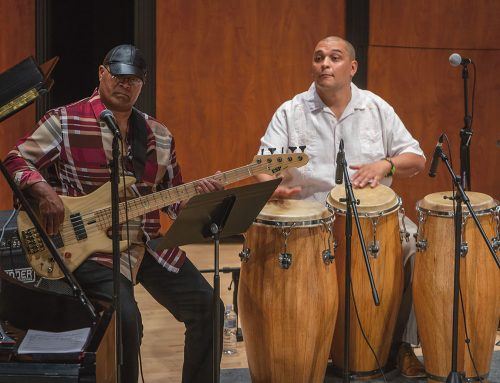 The Andrés Espinoza Band performs Sunday in Morgan Auditorium for the monthly Sundays at the Morgan concert series. Assistant Professor of Music Andrés Espinoza composed and arranged the music for the concert titled “Crossroads.” The band provided a Latin flair as they performed Cubano music. / photo by Melody Blazauskas

The Andrés Espinoza Band, a Cuban band, performed “Crossroads” and livened up the night with a Latin flair that incorporated instruments which conducted deep, rich tones consisting of the bass, trumpet, saxophone, congas, piano and drums.

They performed as October’s musical guest for the Sundays at the Morgan concert series.

“The musicians themselves were outstanding, they were world class players, and then to hear them play Dr. Espinoza’s great compositions, that was a fantastic opportunity to hear,” Reed Gratz, professor of music, said. “He’s a first string composer being played by great musicians, that’s a rarity.”

The audience bobbed their heads and tapped their toes along to the beat.

“The energy of the music had stood out because it was not only simple, generic jazz, it was more upbeat and up-tempo,” Brandon Smith, freshman business administration major, said.

The focus on one instrumentalist created a dramatic effect toward the soloists, Smith said, and made the overall experience more entertaining.

“Each musician was able to command such interest when they had their solo improvisations and then when they were playing as ensemble,” said Gratz.

The world class musicians were using their instruments as their voices to express themselves, said Gratz.

“The congas were my favorite instrument played because they went well with the melody; it added more energy to the night,” Smith said.

Each song had a different tempo with explosions of the drums added to the soft and smooth piano playing; the music was never at a constant flow.

“I really like the piano, I felt like it was the one out of place, all of the other instruments were rustic and the piano was very elegant,” Carolina Menendez, sophomore psychology major, said.

Intertwined with the music were eruptions of applause from the crowd, reassuring the performers that the audience was paying attention to every chord.

Often times, one instrument would take over and silence the others, drawing the crowd to an intense focus, communicated through the stillness of their bodies.

One audience member was seen dancing to the beat as the music played.

“The music reminded me of my childhood because my dad would play a lot of that type of music when I was growing up, he is a drummer and a guitar player,” Faith Martinez, sophomore psychology major, said.

The performers’ smiles and small dances clearly indicated that they thoroughly enjoyed playing for the audience.

“This music was built upon dance rhythms and so there is a natural priority of the groove of the tune of the music with the rhythms playing,” Gratz said. “The emotion is very positive, body moving kind of music.”

Gratz has accompanied the university for decades in choosing who performs once a month.

“We try to get diverse groups of people throughout the year,” Gratz said.

The next Sundays at the Morgan concert will feature Brazilian pianist Rafael Liebich and Friends at 6 p.m. Nov. 4.

Erica Sanchez can be reached at erica.sanchez@laverne.edu.