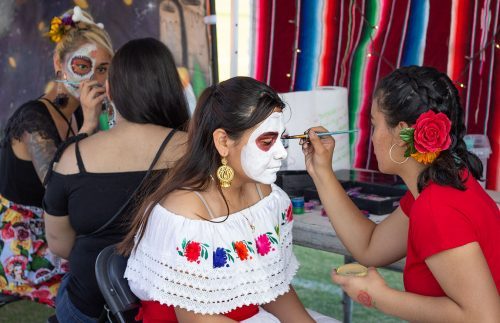 This Hispanic holiday, also referred to as the Day of the Dead, is celebrated on Nov. 1 to honor those who have died.

Some of these traditions of Dia de los Muertos include offering remembrances, masses, rosaries and altars with pictures and food, Canchola said.

People ate Mexican food, ranging from elotes in a cup to carne asada burritos and danced to traditional music.

They also walked around the remodeled lowriders that were on display.

Some owners had altars, known as ofrendas, in and around their cars to honor their loved ones who have died.

“We represent our loved ones that have passed on,” said Susan Carranza, owner of a turquoise two door 1950 Chevy Bel Air. “We are here to celebrate their lives.”

Car owners were proud to share what they had created, but two individuals, Eddie Rodriguez, owner of a 1962 Chevy Impala and Carranza, had a more emotional connection showcasing their cars.

“My car means a lot to me because I am a two time cancer survivor,” Rodriguez said. “When I was diagnosed with cancer my car was being built, and then I got re-diagnosed and I didn’t know if I was going to ride in my car.”

Rodriguez said his license plate reads, “PSLM 21” as a reminder that God will give one the strength needed to fight all battles.

Carranza had a similar experience as Rodriguez.

“My husband built it for me when I was fighting cancer,” Carranza said. “My goal was to survive the cancer and be able to drive it.”

This event brought together people from many different cities, lifestyles and backgrounds to celebrate their ancestors.

“This is our culture and it has been going on for many decades,” said Gilbert Ramirez, owner of a beige 1936 Buick. “It’s exciting, family orientated and everyone comes out to have a good time.”

The skulls, a staple symbol of the holiday, represent death and rebirth.

“It is nice to see multicultural [people] united,” Canchola said. “Especially in this day and time because our country is so divided.”

Carranza said she is looking forward to attending the celebration again next year.

“We represent our loved ones that have passed on, so we are here to celebrate their lives,” said Carranza.