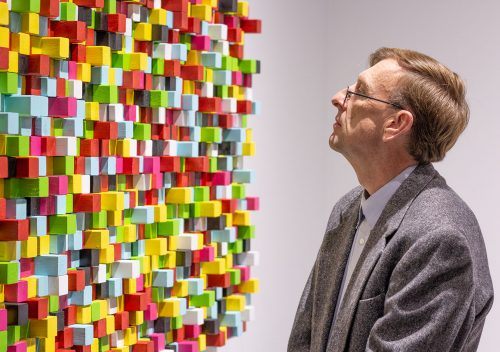 Energy was high with the constant flow of family and friends congratulating the artists for their hard work throughout their last semester.

Smiles lit up the room, and the artists faces beamed as they displayed their work.

Tiffany Huerta, senior studio art major, used acrylic paint on canvas to portray the different prejudices one has in a relationship.

“I started out with a different concept,” Huerta said. “I wanted to do something regarding age, but I developed it into it being more about relationships where it’s about prejudices we face within relationships.”

A painting done using a color scheme of warm, deep yellow depicted a woman who was laying on her bed pregnant and naked.

“She’s supposed to be a young woman who is pregnant which is seen as wrong in different religions,” Huerta said.

Her second painting depicted two lovers sleeping together, with more warm tones of rustic red, that were consistent throughout the whole piece.

“This one is about a couple, but they are living together out of wedlock and you’re not supposed to live like this in some religions,” said Huerta.

Huerta said she highlighted the significance of love conquering all within her pieces.

“Both of them mean love overcoming stigmas, and enjoying your life whether other people think it is wrong or not,” Huerta said.

Huerta said she would like to pursue art as a full time job after she graduates.

The artist painted men who looked like him to represent his other self. Having painted three different pieces of naked men wearing crowns, with some holding flowers, he said that the men depicted the vulnerability of god-like figures.

Padilla said the pieces he created were done all throughout his lifetime, and that it took heavy training to get to this level.

“It was looking at the tensions between the heart and the mind that sometimes dictate different things in your personality or your life,” said Padilla. “It was looking at how that affects me, asking what are the dominant and submissive side of me.”

The three paintings were acrylic on canvas, something the artist described as a comfortable medium for him.

“These pieces symbolize vulnerability,” said Padilla. “I look at them and I know it’s not myself. But in a way they are, it’s an alternate self.”

The most challenging part of creating the art was finding peace with the end the result, he said. Art is an activity where at times it can be hard to let go, which was the hardest part of the process.

Garry sculpted a leg with trees and rose quartz glued onto them, where she implemented a hand hanging while holding a shaving razor.

“Originally my idea was about my emotional maturity from when I was 12 years old to now,” said Garry. “These pieces are about how advertisements affected how I saw myself and the leg is about how I feel now and how no matter what I do or how I look, I am comfortable with myself.”

Her pieces reflect the consumerism aspect of life that was thrown at her at such a young age, she said.

Each of the pieces symbolize something different, with themes of Asian American identity, being a person of color, queerness, femininity, wealth disparities, and the concept of replacing wealth with love, said Lao.

“I combined my personal narrative and experience into a format that I thought was appealing, finding a way to tell my story through visual imagery,” said Lao.

The most challenging part of creating her different pieces was finding new ways to express herself through art, she said.

The Harris Gallery will be showcasing “Wumbology” until Thursday.