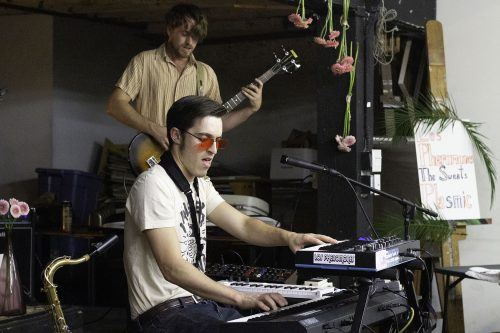 Los Pheromones performed at the CURIOUS Magazine anniversary party at the dA Center for the Arts in Pomona Friday. The celebration was in honor of the magazine’s second volume, “Millennial Pink.” / photo by Melody Blazauskas

CURIOUS Magazine had its anniversary party to release CURIOUS Mag Vol. 2 Issue No.1 “Millennial Pink” Friday at the dA Center for the Arts in Pomona.

The room was filled with roughly 20 vendors selling and promoting their art such as jewelry, drawings, pins, paintings, cards, pins, clothes, photography and poetry.

The event was lively and upbeat, with a rush of about 50 guests strolling through the different vendors, exploring their art as music played in the background; conversations seemed to flow effortlessly between everyone in attendance.

CURIOUS magazine was founded by editor in chief Rebecca Ustrell a year ago on Sept. 22 after she created a zine using a compilation of her friends artwork, she explained.

“I chose the theme ‘millennial pink’ because it was a really popular color at the time and I wanted something to tie together cohesively,” Ustrell said.

This magazine is a compilation of art from surrounding artists, she explained.

“I don’t think I would have had the guts to create the magazine if I did not already have all of the contacts, and if I didn’t already have experience running events,” Ustrell said.

The idea was born at the Claremont Art Walk. Ustrell had first exhibited there as an artist, then eventually took over the event space herself.

It was during this period of her life that she acquired several artist contacts, she said.

“The biggest challenge that I have learned is to not be afraid to reach out and get other people that are experts in what they do, and asking them to help” Ustrell said.

The journey in creating this magazine was a long and hard one, but the pressure to captivate each artist and the essence of their work is the most challenging part, she said.

“I noticed that I can get really disappointed if I am not presenting the artists work in a way where they go ‘This is awesome,’” Ustrell said.

CURIOUS had a small table in the corner to promote the magazine, along with other promotional merchandise related to the publication.

“I am very interested in the arts and non-profits in this area, especially being new,” Spindler-Richardson said. “This was a great opportunity to network with different artists to see what the local scene is all about.”

The magazine inspired more local artists because of its inclusivity by including a wide range of art styles, she said.

“Since I am new to the area I have been kind of anxious joining the community, but having something like CURIOUS in the surrounding area is so encouraging to me, even as a newcomer, because I feel like it is so accepting and supporting immediately for all different kinds of artists,” Spindler-Richardson said.

The event featured a live poetry reading, an opportunity to play vintage video games on older televisions and the chance to eat, drink and celebrate.

The largest artwork in the room was a sculpture of multi-colored people eating at a table.

There was an angel in the middle wearing a sign that read “Donde Esta El Art Budget.”

The table was set with clay food and was life-sized, attempting to bring attention to the guests that there is a severe lack of funding in the arts.

“My favorite part was the poetry that was read because it was real and I related to what she was performing,” Myricca Romero, Pomona resident, said.

There were three different poems performed, highlighting the pain and the struggle faced by people with bipolar disorder.

The event was a jam packed art walk all in one room.