By Antonette Manabat, Jason Cooper on March 14, 2003 in Baseball, Sports 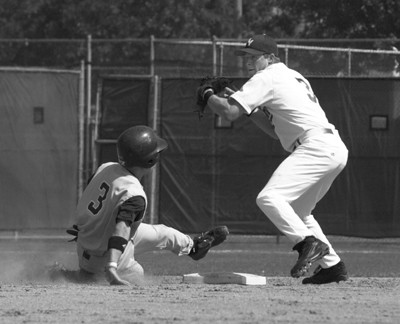 La Verne second baseman Justin Brown attempts a double play after forcing Jonathan Vasquez of Whittier out at second base. The play would produce one out and La Verne’s efforts would result in a 7-3 loss in the first game of a doubleheader Saturday. ULV won the second game of the doubleheader in 12 innings, 4-3. The Leopards went 1-2 on the weekend. / photo by Jason Cooper

The University of La Verne baseball team ended its three-game weekend and seven-game losing streak with a win over Whittier Saturday.

The Leopards won the final game of the Southern California Intercollegiate Athletic Conference series, defeating Whittier 4-3. ULV struggled against the Poets Friday at Whittier, losing 9-6. ULV then faced Whittier Saturday for a doubleheader on Ben Hines Field. The Leopards lost the first game, 7-3.

ULV was able to come back from the two losses, to get through the close 12-inning game, coming out on top over the Poets.

“Our emotion and passion was as good as it’s been all year; they played with great desire in the second game,” said head coach Scott Winterburn.

Whittier was scoreless until the fifth inning when it broke out and took the lead.

Whittier freshmen Ryan Kitamura started things by getting on base on a walk. Senior Joe Moreno then stepped up to hit a homerun to tie the game.

Junior Jonathon Vasquez was then able to score, capitalizing on ULV mistakes: from wild pitches to an error by freshmen shortstop Michael Bockstahler.

The Leopards answered back, tying the game in the fifth inning on junior Joe Scott’s homerun.

“The dugout was really into the game, and they had a great deal of energy; it really carried onto the field,” Winterburn said.

Both teams went scoreless until ULV won the game in the 12th inning. Junior Justin Van Duyne was able to hold off the Poets by pitching seven innings of relief, allowing three hits and no runs.

“Justin played the ball of the year by any pitcher,” Winterburn said.

In the 12th inning, there were two runners on base: Mendoza on first, and Bockstahler on second, when Reyes stepped to the plate.

Reyes doubled, and Bockstahler scored, winning the game for ULV.

Saturday’s first game of the double header began and ended in Whittier’s favor. The Poets scored first in the third inning with Vasquez’ homerun.

The Leopards remained scoreless until the seventh inning, while the Poets continued with three more runs.

ULV answered back in the eighth inning, scoring one run by senior Todd Farrell on an RBI by Mendoza.

The Poets went scoreless in the ninth inning, and it was ULV’s last chance for a comeback, but Bockstahler was the only run to score.

“We haven’t been winning games, and the team has been real beat up by all the losses; they were tired of seeing another game drop,” Winterburn said.

The Leopards host the annual California Classic this weekend at Ben Hines Field.

The Leopards’ first game is 2 p.m., Saturday against Ithaca College of New York, followed by a 5 p.m. game against Redlands at Ben Hines Field.