By Jason Cooper, Meridith Zembal on October 5, 2001 in Soccer, Sports 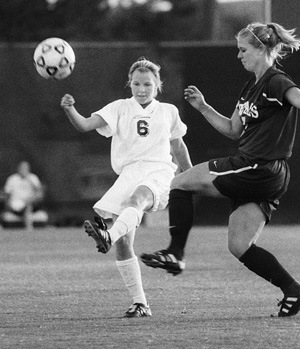 Sophomore forward Ashley Polan moves the ball up field early in Monday’s game against Hope International University. The Leopards controlled the ball most of the game but narrowly averted defeat, winning 2-1 in overtime. / photo by Jason Cooper

After an exhausting three games in the past five days, women’s soccer finished out the week with a record of 3-4.

Schrepfer successfully stopped two shots on goal before colliding with a Redlands player. The result of the collision was an injured ankle. In for Schrepfer was freshman goalie Andrea Taggart who stepped up with four solid stopped shots.

Unfortunately, with just over 16 minutes left in the second half Redlands forward Candace Hayward scored the only goal of the game. The final score was Redlands 1, La Verne 0.

“We had a really even game. Redlands is always a good game played with heart. The girls played hard. They stuck together as a team even with the injuries,” said La Verne head coach, Wendy Zwissler.

The girls were forced to quickly rebound back at their next game on Monday night against Hope International University.

La Verne took 17 shots to the goal, Hope had 6. The Leopards appeared in control of the game. However, they cut it close by taking the game into overtime.

The Leopard’s managed to pull out a win despite the recently injured players.

The game was slow paced as the girls had trouble connecting from defense to the midfield.

Libby Ramos started off the Leopard momentum with a direct kick from about 10 yards out of the goalie box at the end of the first half.

Hope retaliated by forward Christine LaRock scoring a goal from about 20 yards out in the early minutes of the second half.

With the game tied at 1-1, the teams went into overtime.

Following these two games came the much anticipated Cal Lutheran game. This long term rival has defeated the Leopards 22 times and tied once. La Verne was definitely up for the battle, and it showed in their style of play.

The game was evenly distributed at both ends of the field. La Verne’s Kim Schrepfer made her first debut back after her previous injury during the Redlands game. She had an impressive 11 stopped shots and looked as though she had never been hurt.

The teams fought back and forth throughout the entire regular clock which ended with a score of 0-0.

As the defensive strength of both teams shined, the first overtime was also finished with no change in score.

The outcome of the game was determined by a call from the referee in the sudden death situation.

Early in the second overtime, La Verne suffered a penalty that cost them the game. Cal Lu’s Maria Bueschen took the P.K. and scored ending the game at 1-0.

“I am very proud of my girls,” Zwissler said. “It’s unfortunate that a game of such magnitude could be decided by one ridiculous call on a 50/50 ball.”

Cal Lutheran finished the game with a total of 18 shots on goal, La Verne finished with 11.

Although the game was a tough loss, the girls played with their heads.

The loss puts their record at 3-4 in the Southern California Intercollegiate Athletic Conference.

Despite the loss, La Verne women’s soccer is congratulated for their successes during this all around difficult game.

The excitement will continue at their next game at 11 a.m. this Saturday at Pomona-Pitzer.