By Jason Cooper, Melinda Sanchez on February 18, 2000 in News 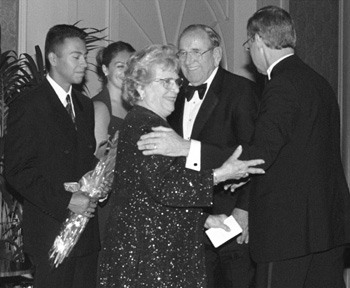 Richard and Beth Landis were honored at the Fifth Annual President’s Gala for their generous support at the University of La Verne. President Stephen Morgan accompanied by senior Maria Sandoval and junior Mario Guerrero present the Landises with the President’s award. The $125 a plate, black- tie dinner raised more than $100,000 for the ULV. / photo by Jason Cooper

Fine dining, romantic candlelight and a piano serenade at the Ritz. It sounds like something left over for Valentine’s Day. This was no celebration of love between a man and a woman, but rather a celebration for the couple’s love and contributions to the University of La Verne.

Program participants Rob Fukuzaki of KABC Sports, President Stephen Morgan, members of the Board of Trustees and several Landis scholarship recipients gathered on Feb. 9, to honor Beth and Richard Landis for their life long contributions to the University.

The Fifth Annual President’s Dinner was held at the Ritz Carlton Huntington Hotel in Pasadena.

“I got a chance to meet the Landises and Mr. Landis was very warm and kind. He made me feel at home,” said Alicia Southorn, a sophomore L.E.A.D. (Leadership Education and Development) scholarship recipient.

The Landis family has contributed to the University for many years and have shared a history with it as well. According to Richard Landis, being alumni and having had several family members attend, the couple feels a special attachment to ULV and refer to the community as home.

The Landises had a couple of their grandchildren present at the dinner, and seemed as grandparents to ULV students also.

Beth Landis said, “In the big cookie of life, our friends are the chocolate chips.”

The Landis couple can ironically be compared to the grandparent icon because of their generous gifts and love for ULV. Through their activity on the Board of Trustees, the Landises have contributed a $3.2 million charitable trust. The couple also expressed a heartfelt interest in students at ULV as a body, and individually.

Ruby Montaño-Cordova, associate dean of student affairs said, “Beth and Richard Landis have been very supportive to student life, and have shown direct support through the L.E.A.D scholarship.”

Through this interaction with the students, the Landises strive to be more like real people, not just a name frequently heard.

To help create a personal atmosphere, L.E.A.D. scholarship recipients assisted in seating guests and had the opportunity to meet the Landis couple and other contributors through out the evening. Sixteen esteemed students were chosen to participate in the program and attend the dinner.

Social Chair of Phi Delta Theta fraternity and a L.E.A.D. scholarship recipient Frank Tolentino said he was “looking forward to meeting the contributors of scholarships to ULV, and as vice president of activities on ASF, it’s good to see who they are and give personal thanks.”

First generation students Maria Sandoval, senior, and Mario Guerrero, junior, each gave a speech expressing their sincere thanks to their parents and the Landises for their undying support through their college years. As members of the First Generation Student Success Program (F.G.S.S.P.) the two students gave a special meaning to President Morgan’s statement, “The Landises have helped in lifting ULV to a new level of excellence.”

Richard Landis expressed his desire to see students advance and succeed when he said, “The opportunity for the future is up to the students who want to adhere their optimum potential.”

The L.E.A.D. scholarship is typically awarded to students who demonstrate a desire to excel and be examples in their leadership roles on campus. According to Deborah Mandabach, public relations director, there have been approximately 500 L.E.A.D scholars over the past 15 years. Most of these students were O.W.L.s, officers in student government, club presidents, or held positions on campus publications, such as Campus Times or La Verne Magazine.

Master of Ceremonies Fukuzaki said “I really enjoy getting involved in the ULV community events, and that’s what makes this all so rewarding.”

In reflecting on the course of events throughout the evening he said that he believed it went rather smooth.

The Landises expressed that they considered everyone at the dinner personal friends, and Fukuzaki stated clearly that “Beth and Richard Landis are the Godiva chocolate chips of our lives.”