By Ariel Torres, Savannah Dingman on October 11, 2019 in Sports, Volleyball 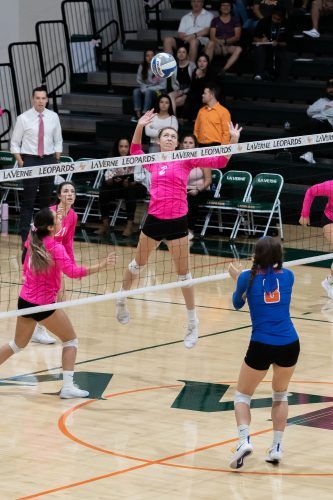 Leopard freshman outside hitter Ayana Mier goes up spike the ball over Sagehen senior opposite hitter Isabel Kelly. The Leopards would go on to take the game in a 3-0 sweep on Tuesday night. / photo by Ariel Torres

Women’s volleyball ended off their first half of conference season on a high note, sweeping the Pomona-Pitzer Sagehens, 3-0.

With the win, the Leopards improve to 6-2 in the Southern California Intercollegiate Athletic Conference and 12-7 overall. The team ends the first half of the season in third place, just two games behind Chapman and one behind Claremont-Mudd-Scripps.

“They did awesome. They did exactly what we asked them to do. They came out with a lot of energy and executed the game plan perfectly,” said Destinee Sales, assistant coach for the Leopards.

In the first set, the Leopards set the tone with a pair of back-to-back kills from sophomore outside hitter Haley Celaya giving them momentum early on. Senior setter Madison Maynes was on a roll with assists, making 10 in the first set alone.

Celaya ended the game with 13 kills and six digs. Maynes would finish as the offensive leader for the Leopards with 29 assists, nine digs and a kill.

The Leopards would go on to win the first set 25-17 with little contest from the Sagehens.

“This week we focused on defense, being quick as blockers and being able to dive into the middle. We played good, smart volleyball tonight,” Sales said.

The Sagehens stayed resilient in the second set, keeping the score pretty back and forth. This momentum was short-lived for the Sagehens due to some consistent attack and service errors through the middle of the set.

These errors cost the Sagehens and the Leopards capitalized, scoring seven points in a row earning a huge lead.

The Sagehens came back to win some long rallies but were ultimately unable to return some killer serves back over the net from junior libero Emma Estigoy and junior outside hitter Pi’ikea Clemens.

The Leopards ultimately dominated the set, with a kill from freshman middle blocker Jasmine Chandler sealing the deal at 25-18.

In the intermission, the coaches were so pleased with the team’s performance they had very little instruction for their team. The coaches knew if the team kept taking care of their side of the net that the game would play out the way they needed.

Following intermission, the Leopards came out with energy, but the Sagehens were not going down without a fight. The Sagehens were able to put some points on the board with some strategic light taps over the net.

“We worked on our block line-up and [the Sagehens’] hitting tendencies. They had multiple hitters that could terminate, the majority of teams we play only have one, so they had a pretty spread out offense,” said freshman setter Jordyn Patton.

The Sagehens were no match for the Leopards in the third set, as they struggled with attack errors; overhitting the ball wide or out of bounds.

After Pomona-Pitzer called a timeout, they continued to try and claw their way back.

The Sagehens would score three consecutive points after the timeout, but the Leopards’ lead was too great to overcome.

“It was our last game of conference, so we needed to go in and end the first round on a good note and set the tone for the next round,” said Noelle Blumel, freshman defensive specialist.

Freshman outside hitter Ayana Mier scored the game winning point, sending a lethal kill to the edge of the court as the Leopard sideline cheered. Mier finished the game with nine kills and two blocks.

“Looking forward to next game we are going to work on being disciplined and staying true to our culture and our game.” Mier said.

The Leopards will have a 10-day break before they start their second half of their conference games on the road against Cal Lutheran at 7 p.m. Oct. 18.