By Alexandra Arkley, Hal Hargrave on February 13, 2015 in Sports, Tennis 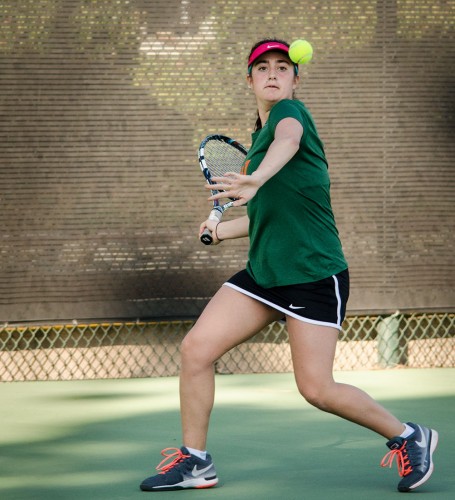 The No. 15 La Verne women’s tennis team served its way into action with a 9-0 sweep victory over Occidental Sunday at the Claremont Club.

This match started off the 2015 season and Southern California Intercollegiate Athletic Conference play.

“The season crept up on me fast this year and it didn’t really hit me until we started playing today that we were actually in season,” senior Andrea Madrigal said.

“But the fact that we came out with a lot of energy and executed on the things that we needed to do was a good indicator of where we are to start the season and that is definitely in a good place as a team,” she said.

The Leopards started the match with three straight wins in the three doubles matches.

The duo of senior Laina Matsuda and sophomore Bridget Etchegaray were able to take down the Tigers duo of junior Keilani Bonis-Ericksen and senior Sara Charney, for a 8-4 win.

After the doubles portion of the match, the Leopards were able to tally off six straight wins from each of their singles players, while only dropping one set in the process.

Madrigal faced Bonis-Ericksen and defeated her, 6-0.

Etchegaray took down her opponent Charney, 6-1, 6-3, but still felt that there was room for improvement heading into this weekend.

“I did struggle today in my match, my shot selection was not there that I would have liked, but I was still happy that I was able to come out with a win,” Etchegaray said.

Although she dropped the first set to Occidental, she came back in the next two. Torres dropped the only set of the day for the Leopards, they were still able to pounce out victorious.

“We did lose two paramount players last year who graduated so that was a big blow to the team, but it is our job to step up and fill their shoes,” Madrigal said.

“The program did bring in a couple new girls who I’m confident in that bring a lot of energy every single day so I’m confident that we can finish top of league again this season,” she said.

Nervous for her first collegiate match, Chinn stepped up in a big way for the Leopards.

She was able to take down Hutkin, 6-0, in two straight sets.

“It was such an awesome feeling today to get my first match under my belt as a Leopard. It definitely was the right way to start off my college career,” Chinn said.

“Hopefully I can maintain that for the rest of the season. I would like to win 75 percent of my matches this year because that would ensure that I’m helping out the team in a good way,” she said.

Trujillo, the last to play for the Leopards, defeated her opponent, sophomore Isabella Korfmann with a 6-1, 6-2 win.

The Leopards finished second in conference last season, losing to Claremont-Mudd-Scripps, 5-4, in the finals.

The team also received its highest ranking ever in 2014, at No. 14 in the nation with a 16-6 overall record and 8-3 in SCIAC. They also made the NCAA Championships for the first time in school history.

With the direction of head coach Yolanda Duron, she led the team to a strong season.

“We came in with high expectations and knowing that this would be a favorable match for us so that we could get our incoming freshmen and newbies accustom to the Leopard way,” Etchegaray said.

The Leopards will travel up the coast this weekend to Oregon to face George Fox at 3 p.m. Saturday.

Then the Leopards will have another match at 2 p.m. Sunday at Linfield.

“We will take the season as it comes, but as much as we talk about trying to duplicate what we did last year I think as a team our goal is to do even better,” Etchegaray said.

“This is a new season and we have new things to work on in regards to the things that we did last year. We do have our goals this year for how we want to do in each and every match, so as long as we are up to par with obtaining those goals we are going to be just fine,” she said.