By Alexandra Arkley, Hal Hargrave on April 17, 2015 in Sports, Tennis 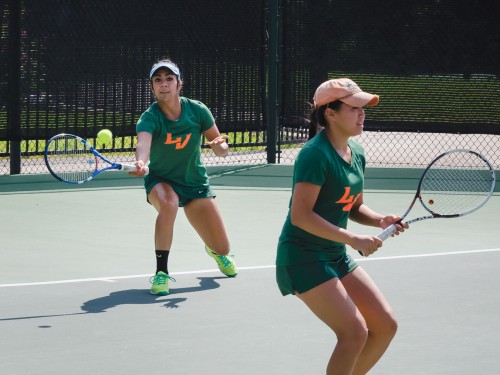 Andrea Madrigal and Janae Chinn face off against Pomona-Pitzer’s Sagehens Saturday. One hour into the game with the Sagehens leading 7-2, Madrigal returned a volley, which started with her serve, to continue a small rally. Madrigal and Chinn put up a fight against their opponents but the Sagehens flew over the Leopards, 8-3. / photo by Alexandra Arkley

The No. 26 University of La Verne women’s tennis team fell in a match to No. 7 Pomona Pitzer Sagehens, 7-2, Sunday at the Claremont Club.

The loss dropped the Leopards to 11-5 overall, and 5-2 in Southern California Intercollegiate Athletic conference play.

“I was really proud with how well the girls competed and did the best they could in the match given the circumstances of all the emotions of the day,” senior Andrea Madrigal said. “I felt we got a good indicator of where we were at and I have all the confidence in the world that if we face Pomona Pitzer in the conference tournament again that we can take it to him and beat him.”

Head coach Yolonda Duron recalls the program and team being entirely different when she took the job six years ago.

“Both of our seniors, Laina (Matsuda) and Andrea, are to thank for that because now they have put the program on the map and set the standard for what it means to be a Leo,” Duron said. “While both are so different off the court, they have a ton of similarities on the court with how they compete. Last year they were both All-Americans and while I hope they get those awards this year, it is more than that because they are making history and will be in the Leo Hall of Fame someday.”

La Verne fell in a quick hole to Pomona-Pitzer by getting swept through the three doubles matches.

Matsuda and sophomore Bridget Etchegaray dropped the closest doubles match of the day to junior Lea Lynn Yen and freshman Grace Hruska of the Sagehens, 8-5.

“I think both Bridget and I were overwhelmed from the day with a lot of emotions of it being senior day, so we fell behind early in the match,” Matsuda said. “Toward the end of the match our chemistry got better and we were hitting some good shots, but we put ourselves into deep of a whole to try and dig ourselves out to come back and win.”

Unfortunately for the Leo­pards the trend continued in the second doubles match. Madrigal and freshman Janae Chinn fell to freshman Shivani Dorai­swami and freshman Emily Chen of the Sagehens, 8-3.

Freshman Maryann Zhao and sophomore Maddie Gordon defeated sophomore Lauren Torres and junior Shenelle Trujillo of the Leopards, as a 8-3 score, remained the same for Pomona-Pitzer in the final doubles match.

Last year, marked the first time since 1998 that La Verne was able to beat Pomona-Pitzer in tennis.

“Pomona is historically a great program and the difference over the weekend was the fact that they were willing to hit the ball one extra time, we were not and were second-guessing ourselves,” Duron said. “It is happened before this year, and it’s because we want it so bad. But, we need to be able to slow down the game and think out on the court and be mentally tough.”

With the Leopards at a 0-3 deficit heading into the round of singles, they would need to rely on their senior leadership.

Madrigal went out with a bang on her last ever-home match with the feeding her opponent Yen, 6-4 and 6-4, as the No. 1 singles player.

“I’m really good friends with Lea, so it made it tough for me to get really intense playing against a friend,” Madrigal said. “I was focusing on just getting every ball in on the court and trying to finish off final points in games. Overall it was a great match and competitive between the both of us.”

In Matsuda’s match she was impressive with many of her backhand hits and was able to take down her opponent Doraiswami, 6-4 and 6-3.

“It was a great match up for me because my opponent like hitting the ball extremely hard every time and I was able to counter that with the variety of different shots that I have; backspin, top spin, and a lob shot, which really took her off her rhythm,” Matsuda said.

With the Leopards then trailing 3-2 with four matches to play, things remained tight.

The No. 3 and No. 4 singles players for the Leopards, Etchegaray and Torres, both fell in close matches to their opponents.

Pomona-Pitzer found control in the final two singles matches and was able to put the Leopards away.

“It was one of those days as a team where we were missing a lot of last points in games and not putting away shots, where it may have been a lack of concentration,” Madrigal said. “But, we played hard and put it all out there. We have no regrets in that regard.”

Trujillo dropped a tough match, 6-2 and 6-0, to Chen of Pomona-Pitzer.

The loss moved the Leopards to third overall in SCIAC, with only Pomona-Pitzer and Claremont-Mudd-Scripps sitting above them, while Redlands and Chapman are one game behind La Verne in fourth place.

“As long as we stay together as a team, and focusing on working as a unit and show up with a positive attitude then we will bring the best game that we have to Whittier,” Madrigal said. “I need to find a way to be more intense and come in with a really competitive mindset to try and boost the team heading in to conference tournament.”

The Leopards will wrap up the regular season at 10 a.m. Saturday at Richard Ettinger Tennis Courts against Whittier.