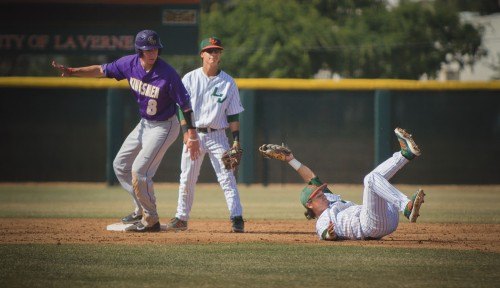 With no outs in the top of the fourth inning, junior second baseman Aaron Orona fielded the ground ball that was hit to right field, holding Cal Lutheran’s Davey Casciola on second base. Friday’s game at Ben Hines Field ended with La Verne winning 5-4. / photo by Jerri White

The baseball team took the first game of its series against Cal Lutheran, 5-4, Friday at Ben Hines Field.

The Leopards remain in first place in the Southern California Intercollegiate Athletic Confer­ence with a record of 15-6, and 18-13 overall on the season.

“We are not surprised that we are sitting in first place this late in the season, because it has come with hard work, preparation, and a mind set of staying confident,” sophomore infielder Ben White said.

Senior pitcher Javi Iniguez pitched eight innings while giving up four runs on 10 hits and striking out four in game one.

“I knew going into the Friday game that I needed to put my team in the best position to take game one of the series,” Iniguez said. “I was facing one of the better pitchers in conference and I didn’t feel the need to match him pitch for pitch, but just pitch my own game.”

La Verne got the scoring going early after senior left fielder Mark Jebbia led off the second inning with a walk. Senior catcher Zach Quinones sacrifice bunted Jebbia to second base and was eventually brought home on a base hit to left field by junior center fielder Nolan Henley, 1-0.

After pitching two scoreless innings Iniguez ran into some trouble in the third inning giving up two runs to the Kingsmen. Senior second baseman Nico Filice led off the inning with a solo home run to left field.

Iniguez then hit junior center fielder Justin Caña with a pitch, putting him on first.

Then junior right fielder Ramsey Abushahla brought Caña home on a base hit to right field, putting the Kingsmen up 2-1.

Kingsmen pitcher Scott Peters then settled in and La Verne could not respond in the bottom of the third inning and Cal Lutheran capitalized again in the top of the fourth inning.

Filice picked up his second RBI of the game after he singled to left field driving home junior first baseman Davey Casciola and advancing senior designated hitter Collin Crowl to third base.

The following batter, Caña, hit a sacrifice fly to center field scoring Crowl from third base, 4-1.

“I struggled in the middle part of the game and felt like I was losing control of the game, but luckily I had my team there to pick me up with five runs,” Iniguez said.

In the bottom of the fifth inning, the Leopards found life and were able to bounce back.

Senior right fielder Tyler Watkins was the first one to get on base on a walk. Junior second baseman Aaron Orona then reached on an error, advancing Watkins to second.

White then hit a triple off the right field wall scoring both Watkins and Orona, cutting the deficit, 4-3.
Jebbia kept the rally going by singling up the middle and scoring White.

“Whenever you get somebody to third base with one out, as a team you want to do whatever it takes to drive that guy in,” White said. “Jake came up after me and popped up to the infield, and I was happy that Jebbia was able to pick him up and drive me home. In games with Cal Lutheran they are always close, so every run counts.”

Cal Lutheran right fielder Abushahla dropped a pop fly off the bat of Quinones scoring Jebbia from first base and giving the Leopards the lead, 5-4.

La Verne freshman pitcher Nick Byrd was able to provide a huge save, striking out the final batter of the game with a runner in scoring position.

Byrd recorded a quick out to start the inning drawing a ground ball to junior shortstop Woody Reyes. The following batter, senior catcher Chris Whitmer, hit a ground ball to Reyes who then threw the ball high across the diamond and pulled White’s foot off the bag, putting Whitmer on first base.

Byrd was able to strike out the final two batters of the game swinging to give the Leopards a 5-4 victory.

“I remained confident in the things that I was doing in the pitches I was making even after the error was made because I knew I was drawing ground balls and my defense would help me out,” Byrd said.

The Leopards continued the series with a doubleheader on Saturday at Cal Lutheran’s Sparky Anderson Field, where they lost both games, 3-1 and 2-1, to the Kingsmen.

The Leopards lost game one, despite a strong pitching performance from Jebbia who gave up no runs and two hits through 7 1/3 innings pitched.

Byrd came in with one out in the top of the eighth to relieve Jebbia and surrendered three runs to Cal Lutheran. Byrd loaded the bases before he could record an out and then gave up a bases clearing double.

“Jebbia threw one heck of a game and I am so bummed that I was not able to pick up a big win for him and the team,” Byrd said. “I got the call for an inside fastball and I left it over the plate too much, and in this league if you leave the ball over the middle of the plate you pay for it and I did.”

The Leopard’s only run came in the third inning after the Kingsmen caught Orona in a run down between first and second. Reyes took advantage of the situation and stole home.

Cal Lutheran eventually went on to win the game.

Game two showed promise for the Leopards when White singled to the right side allowing Watkins to score in the top of the first inning, 1-0.

Early went 7 1/3 innings on the mound and gave up two runs late in the game.

Cal Lutheran tied the game off of a single from Sanchez in the seventh inning, which scored Caña.The Kingsmen then were able to score again in the eighth inning after Crowl doubled down the left field line scoring Casciola to take a 2-1 lead into the ninth inning, which they ultimately held on to, winning the game.

“Coach has been talking a lot about our resolve as a team and how we handle things when we get punched in the mouth,” White said. “We need to get better at punching back and coming back with confidence each time we are knocked down or fall behind. We need to start creating our own momentum, and stop waiting for that call to go our way, or for us to fall behind to get motivated and hopefully we can do that against Chapman this coming weekend.”

The Leopards will be back in action at 3 p.m. Friday, as they face the Chapman Panthers at W.O. Hart Park. They will play the Panthers in a doubleheader starting at 11 a.m. Saturday at Ben Hines Field as well.