By Gabriella Chikhani, Michael Saakyan on October 17, 2014 in LV Life 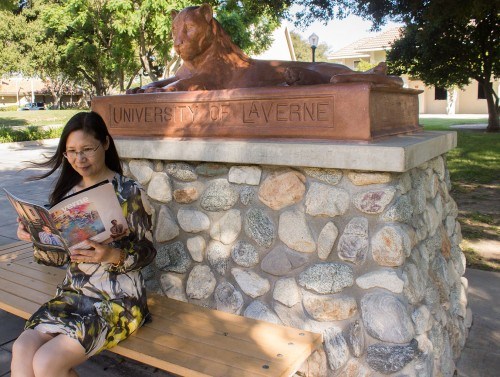 Visiting professor from China, Sara Jin is working on a study about differences in media communications between the United States and China. She will be speaking to communications classes and her research will later be published in a Chinese textbook. / photo by Michael Saakyan

As she stepped outside of the Arts and Communications Building and into the unforgiving sun, she placed a hat on her head and began to talk about her home, Wuhan, China, which happens to be one of the hottest and most humid places to live.

She is not a fan of the heat and said she cannot believe how hot it is in California during the fall. Her name is Cui-ping Jin but she goes by Sara Jin. She is a visiting journalism professor from Jianghan University in China and is working on media research here.

She laughed as she explained the meaning behind her first name.

“Cui is green and ping is something like water but for American people, Cui is not easy to pronounce,” she said.

Jin is researching several different topics including why private discourse has been published more in the Chinese media since the 70s, how reporters cope with interviewing sources with differing cultures and backgrounds, and comparing Chinese media with American media.

“She’s going to bring a rich message from China as far as the way media is done in China,” said George Keeler, chair of the communications department.

After Jin graduated with her degrees in politics and history, she still had a desire to learn. She was influenced to become a journalist by Chinese society.

Jin says the occupation is respected China. Jin decided to jump into the journalism field and that was when she developed a curiosity for modern society.

Jin says researching did not come easy to her but she dedicated a lot of her time to reading journalism, literature, sociology and philosophy books, which helped her enhance her researching skills.

Communication interests Jin because she wants to uncover the reasons behind what attracts an audience to a show. Although Jin prefers to watch the news, she conducts most of her research by watching reality television.

Jin taught at Jianghan University in China, which works closely with La Verne, through an exchange program and decided to conduct her studies here during her year-long stay in Pomona with her husband.

Jin said that China does not believe in having psychologists and because of this people use the newspaper as an outlet for their private affairs by venting to reporters. A phenomenon she says started in the 1970s.

Through freelance work, she has had over 20 articles published and has been the co-editor for two books. Jin said schools in China lack a textbook written by a Chinese author that teaches them why the audience enjoys television.

She hopes to complete her research in 2015 and has been asked by her publisher to combine all of her findings into a Chinese journalism textbook. Jin shares her passion for Chinese culture any time she can by doing even the simplest things like demonstrating how to write in Chinese characters.

“She is an open minded, talkative person and she’s really friendly,” said healthcare management graduate student Chen Li, who is a friend of Jin.

Jin has been asked by the communications department to speak in classes on her research. After she completes the current book she is working on, she said she would love to co-author with a professor she met while studying on scholarship last semester in Taiwan for another project.