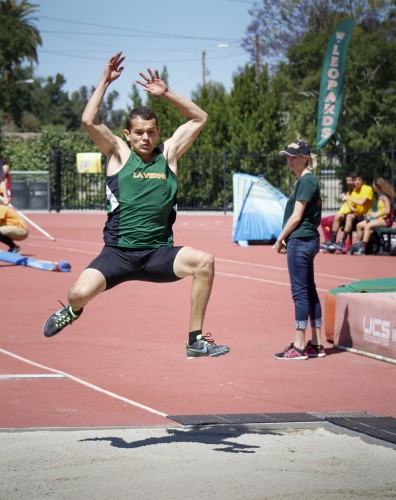 Senior Jacob Lopez jumps 6.56 meters in the long jump, good for fourth place in the Southern California Intercollegiate Athletic Conference Multi-Dual 3 meet Saturday at Ortmayer Stadium. Lopez also won the triple jump with a mark of 14.43 meters, putting him in the top 10 in the nation. He was also named SCIAC Male Athlete of the Week and Leopard of the Week. / photo by Brooke Grasso

The men’s and women’s track and field teams posted records of 1-3 at the Southern California Intercollegiate Ath­letic Conference Multi-Dual 3 Saturday at Ortmayer Stadium.

Chapman, Cal Lutheran, Pomona-Pitzer and Claremont-Mudd-Scripps all competed at the meet.

“So far (the performances) have been really good,” head coach Pat Widolff said. “We had a lot of people quit at the start of the year. That was disappointing, but the new kids have kind of taken their place just as well.”

For the women, freshman Melissa Cerrillos stole the scene, winning the 3,000-meter run on the final stretch of the meet.

“My goal was to just do my best time and I knew who I was racing off of so I was just trying to stay with her and then outkick her at the end, so I did that,” Cerrillos said. “It feels really great to be ranked first in conference right now. It all came together.”

Cerrillos finished the race with a time of 11:34.62, a personal record.

Junior Tiahna Gillon came i second place for the 100-meter dash with a time of 12.36.

Sophomore Catalina Lee Kim placed third in triple jump with 10.97 meters and in the 100-meter hurdles with a time of 15.69, recording personal records in both.

“It was hard, I’ve never done anything like that before. Also, I just came off an injury so I’m just trying everything out,” Arcos said.

He said he wants to improve on his hurdle jumps by the end of the season.

Senior Jacob Lopez was the winner of the triple jump, with a jump of 14.43 meters.

His mark is among the top 10 nationally in NCAA Division III.

The performance earned him SCIAC Male Athlete of the Week and Leopard of the Week honors.

Lopez is also contending for a spot at the 2016 NCAA Division III Outdoor Track and Field Championships.

Junior Michael Burciaga-Ellis finished in second place in the javelin throw with 49.40 meters.

Gura also placed third in the discus throw with 41.00 meters.

“It’s always fun to run at home, in front of the home crowd and we’ve been performing at a high level so far,” assistant track and field coach Bryan George said. “I think overall we’ve been doing well in our progression toward the championship season, so I think we can do some pretty good things in a couple of weeks.”

The teams will be back in action at the UC  San Diego Invitational Saturday beginning at 9 a.m.