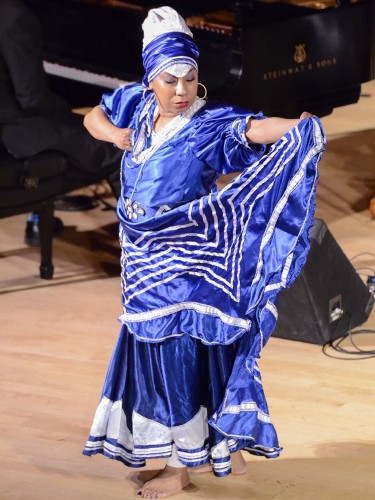 Havana native Kati Hernandez performed to Afro-Cuban folkloric music Sunday in Morgan Auditorium. Los Angeles-based SitaraSon accompanied her with traditional Cuban and Latin Dance music, as part of the Sundays at the Morgan concert series. The next in the series, “Ode to Ireland and Irish Music,” will be March 6. Suggested donation $20, students are free. / photo by Jerri White

“All the music we played has a strong African influence. Some direct and some less obvious,” Wilmore said. “Every­thing from the actual Conga drum design, to the rhythms and melodies we sing was born in Africa.”

The concert opened with a song for Elegua, which is commonly played first in Afro-Cuban shows.

“He is a deity that represents the crossroads so he opens (and) closes paths for us,” Wilmore said.

Havana native and dancer Kati Hernandez danced to the upbeat song for the deity Ochun.

Assistant professor of music Andres Espinoza said a dance accompanying the musicians showcases African culture, in which music and dancing go together.

Wilmore said Galarraga grew up in Havana, where the street vendors all had their own songs.

SitaraSon played an original called “Con SitaraSon” from the group’s first album, which will be released soon.

Freshman sociology major Deborah Lee said some of the more mellow numbers made her feel calm.

Hernandez returned to the stage to dance for the Orisha Yemaya, where SitaraSon played the Batá drums.

“Yemaya is known as the mother of the earth. She represents the ocean in its many different forms,” Wilmore said.

To conclude their performance, SitaraSon played “Emboba,” a song that combines Congolese dialect with Spanish from the religion Palo.

“This song is a perfect example of how African rhythms and songs not only influence Cuban music but are even put directly into the music,” Wilmore said.

Espinoza said that having SitaraSon perform was the perfect way to honor Black History Month.

“Having an Afro-Cuban group definitely qualifies as a way to honor Black History Month because of its diversity,” Espinoza said. “The La Verne community is used to listening to classical and jazz music during Sundays at the Morgan so seeing something like this was very creative and different.”