By Jerri White, Kat Simonelli on April 8, 2016 in Baseball, Sports 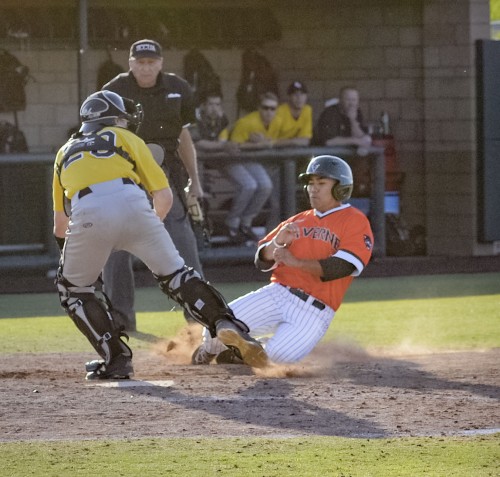 La Verne freshman left fielder Chris Ligot scores on a double by senior center fielder Nolan Henley in the eighth inning of Friday’s game against Pacific Lutheran at Ben Hines Field. It was the last run the Leopards scored before losing to the Lutes, 14-6. / photo by Jerri White

The baseball team could not hold off the Pacific Lutheran Lutes, as the Leopards dropped both games 14-6 Friday and 15-6 Saturday at Ben Hines Field.

“This weekend was tough, it was a struggle,” head coach Scott Winterburn said. “We didn’t pitch it very well. Our pitching staff’s struggling right now. We’re not commanding the counts and that team took advantage of it.”

The Leopards started Friday’s game with a lead, scoring a run in each of the first two innings.

The Lutes’ bats were hot in the third, however, to claim a 5-2 lead.

After a scoreless fourth inning, Pacific Lutheran scored another six runs in the fifth, pushing their lead to 11-2.

Pacific Lutheran scored another three runs between the sixth and seventh, but La Verne was not going to go out without a fight and began to rally in the bottom of the seventh.

Freshman left fielder Chris Ligot started the inning with a single up the middle then advanced to second on a wild pitch.

“I think we were able to show a little bit of strength in our resilience,” Reyes said. “It’s really easy to fold your tent and to give up or to quit in a game when you’re not too close. But I think we did OK by still trying to battle and fight our way back in.”

With the bases loaded against Pacific Lutheran junior pitcher Jacob Gleichman, senior designated hitter Ben White smashed a two RBI single up the middle to cut the deficit to 14-5.

“This season personally has been a struggle for me, both mentally and physically, so it’s always good to come back and contribute in the way that I can at the plate,” White said. “It’s always nice to get a hit. Doesn’t matter really where it is, it just feels good. It’s why we play, right?”

La Verne scored one more run in the eighth after Henley doubled to left field, driving in Ligot, but it was not enough to catch up to the Lutes’ massive lead and the Leopards dropped the game 14-6.

Pacific Lutheran scored one in the first inning and the Leopards answered back immediately, but that was as close as the game would get.

The Lutes scored all 15 runs of their in the first five innings.

La Verne answered back in the fifth after junior catcher Jakob Thomas hit a 430-foot, three-run home run to center.

White and freshman first baseman Chris Peres scored on the blast, cutting the deficit to 15-6.

“I just kind of wanted to focus on that at bat I was just trying to get a pitch I could hit and just try to drive a ball into the gap,” Thomas said. “Luckily it went over the fence but I just put a good swing on it and that was important.”

Winterburn said the team has a lot to improve on.

“We have to play the game the right way and if we can do that I think we give ourselves a chance to have some good offense,” Winterburn said.

The Leopards say they are taking the losses with a grain of salt and looking ahead to their next series.

The Leopards will take on the Occidental Tigers at 3 p.m. Friday at Ben Hines Field, followed by a Saturday doubleheader with the first game at 11 a.m. at Anderson Field in Eagle Rock.