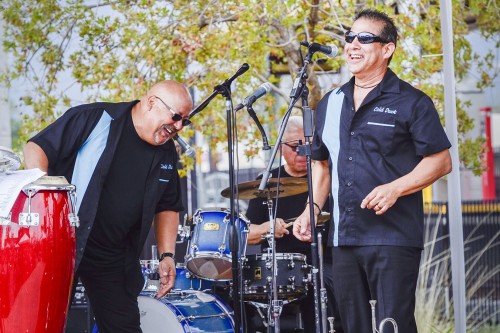 Jose “Chepe” Cuadra and Gene Chavez perform with their eight-member band Cold Duck to celebrate the opening of the Gold Line Foothill Extension Saturday in Arcadia. Cuadra assembled the band in 1969 and is the lead vocalist but also plays trumpet and percussion. Chavez sings and plays the flugelhorn and trumpet. Cold Duck is a Los Angeles band that performs dance music. / photo by Jerri White

“The addition of the Gold Line will bring the city of Arcadia into the 21st century, because we will now have connections, not just to L.A., but all the way to Azusa,” Arcadia resident and member of the Arcadia Historical Society Joyce Saunders said. “It’s good for the Foothill cities economically and to feel like they’re part of one another.”

The celebratory event began with an aroma of roasted fajitas sizzling on hot plates from food vendors and other local eateries.

The light, carefree atmosphere transitioned to one full of energy as the crowd cheered during the arrival of the first Metro train.

As the train came to a halt at the station, members of the Arcadia City Council came out and began the ribbon-cutting ceremony.

Mayor Gary Kovacic said the extension will change the lives of all Foothill cities by helping those who often sit in traffic on their way to work in Los Angeles.

Los Angeles County Metropolitan Transportation Authority CEO Phillip Washington made an appearance much to the excitement of the lively crowd.

“This infrastructure will be here for 50 to 100 years,” Washington said. “It will benefit our children and our children’s children.”

Washington explained how the new 11.5 mile Foothill extension brings the Gold Line system to 31 miles, making it the longest light-rail line in the Los Angeles county.

Washington also alluded to the possibility of extending the Gold Line to Claremont.

As the ceremony came to a conclusion, the Metro train opened up to the eager crowd offering free rides from 11 a.m. to midnight.

Arcadia High School senior Briana Shen said the new Metro extension will make traveling to Los Angeles more convenient and alleviate the commute for her and her family.

“My family and I often travel to Chinatown and Union Station,” Shen said. “Instead of having to drive all the way to Pasadena, we can use the Metro station in our city.”