By Breanna Ulsh, Miguel Fernandez on February 17, 2017 in LV Life 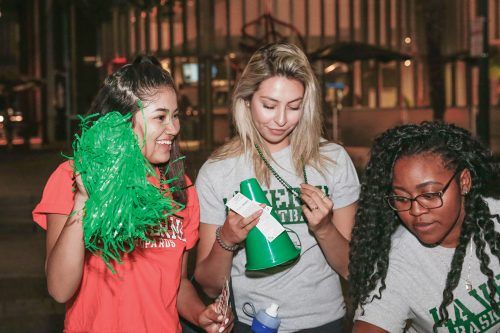 La Verne students Taylor Bolden, Flynn Salas-Miller and Corrina Scott pick up spirit gear and free food from the basketball tailgate Feb. 9 in Johnson Family Plaza. The event was sponsored by the Campus Activities Board. More than 30 tailgaters cheered for the University of La Verne Leopards in their victory against the Redlands Bulldogs. / photo by Breanna Ulsh

The Campus Activities Board held a tailgate party for the men’s basketball game against the Redlands Bulldogs Feb. 9 at the Johnson Family Plaza.

All students were welcome to enjoy pizza and chicken tenders provided by CAB.

Spirit tools including beads, temporary tattoos and car fresheners were also given away to show school spirit during the game and to represent La Verne off-campus.

The University’s spirit crew is in charge of organizing events catered to encouraging the student body to show school spirit as well as show support.

“My goal is to bring more people out to the games,” Simon said.

“I hope the guys win. We want to show them we notice their hard work,” she said.

Simon was at the tailgate sporting the spirit goodies and gathering students to show support.

More than 30 people were at the tailgate within the hour.

Tailgate events are put on before sporting events to get students excited for the game and show their team support.

“I’ve been to one tailgate before,” Bentley said.

“I’m going to support the guys and show school spirit,” she said.

“I hope that this tailgate brings awareness, brings publicity and support,” Ramirez said.

Shortly after the tailgate finished, the men’s basketball team went head to head with the Redlands Bulldogs at Frantz Athletic Court and won, 87-84.