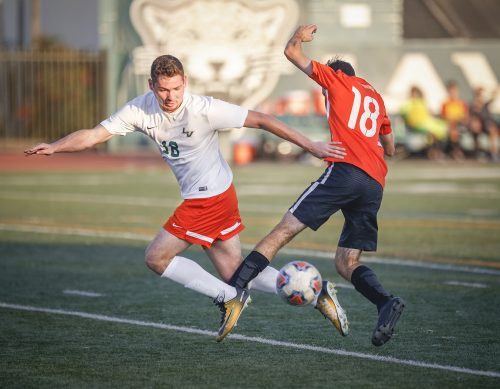 La Verne sophomore forward Christopher Wong battles for possession of the ball with Caltech junior midfielder Rafael Fueyo-Gomez during the first half of the game Saturday. The Leopards skinned the Beavers, 3-0, at Ortmayer Stadium. / photo by Breanna Ulsh

With early goals in both halves and overall domination, the men’s soccer team beat Caltech with big numbers for the second time this season in a 3-0 victory Saturday night at Ortmayer Stadium.

Flipping the page on past struggles with possession and turning it into their main strength this time, the Leopards were intentional with control from the start and populated the midfield, pushing their offensive line high up while the Beavers tried to hold back.

“It’s definitely something that we’ve been addressing in the past,” senior defender Ferdinand Estrada said. “We’ve noticed that we have struggled, so we used a different formation to help us improve our possession, and we hope that carries on to the rest of the season.”

In the sixth minute of play, La Verne got the early lead with a free-kick gone wrong for Caltech.

After the Beavers’ shot hit the wall, the Leopards quickly set up a counterattack that caught the rival’s defense off guard and ended on the other side of the field with the ball on the back of the net.

Senior forward Andrew Maldonado carried the ball freely through the left wing all the way to the edge of the area in Caltech’s defensive half, centralizing it for senior midfielder Javier Jasso to finish with a classy first touch making it 1-0.

From that point on, the Leopards never looked back and dominated the field while the Beavers, suffocated, could not create opportunities and struggled to take their offense past the midfield.

“It was still a difficult game, we didn’t go in with too much confidence because we know that they are still a team that can surprise you,” Estrada said. “But we definitely studied them, studied their film and we knew exactly what they were going to do and we planned accordingly.”

For the remainder of the first half, La Verne asserted a collective and versatile game plan, circulating through the left, right and center and keeping possession.

Not only that, but the Leopards also managed to keep the ball on the ground more – an adjustment from previous games when long passes were easily triggered – which helped improve overall play-making.

Synced in defensive and offensive efforts, the home team drew the visitors in with their strategy and did not rush plays, trusting the process.

“All week in training we’ve been working on one and two touches, and coming in our coach is confident in our touching ability and our passing in practice, so we were ready,” freshman defender Tyler Avila said.

With Caltech mainly defending and waiting for occasional spaces, La Verne kept their defensive composure and administrated the lead well, but did not manage to increase it in the first half, despite creating several chances.

A little over the halfway mark of the first 45 minutes, the intensity started to gradually drop, and while the Leopards still dominated, the offensive power did not translate into more goals.

“We played well, kept the ball calm, collective and we weren’t panicked,” sophomore forward Christopher Wong said. “We were just playing our game, playing easy and playing nice, passing…”
La Verne had 12 total shots in the first half and six on goal, while Caltech had six total, with five on goal.

“We just didn’t finish our chances,” Wong added. “We had a lot of chances, we just didn’t put them away and that was probably the main thing.”

Any comeback hopes the Beavers had for the second half were quickly crushed, as Wong scored another early goal for La Verne in the 48th minute to make it 2-0 and reassure the Leopards’ dominance.

“It was on the right side, someone gave it to Luis (Hernandez) and he just no-look touched it towards me and then I one-touched it in the goal,” Wong said. “We could’ve scored a little bit more, but for the most part, 3-0 is pretty good. I’m not upset about it.”

Hitting the crossbar, finishing long shots, building plays from the back and carrying the ball through the wings, La Verne kept their attempts diverse in the second half and built up substantial volume.

Although Caltech sporadically attempted to step up and have more initiative, the game did not go their way.

In the 64th minute, the Leopards celebrated yet another goal, by senior midfielder Carlos Chavez, which gave final numbers to the clash.

“I got to thank my teammates, Audie (Foxe) put me on a platter and I just executed the way our coach wants us to finish the ball,” Chavez said. “I feel like our coach has done a great job putting us in the right position, he’s been orchestrating good practices and we’re playing simple. One, two touches like he’s asking and it is clicking right now, so let’s hope we keep it going forward.”
La Verne accumulated a few more opportunities before the final whistle, but none were converted.

This was the second time in the season that the Leopards beat the Beavers by a three-goal difference, and this time with a clean sheet – at Caltech, they managed a 4-1 road win.

“I think we came in with a good mindset. We knew how they were and how they played, so I think overall we played better than we did at Caltech,” Avila said. “There was some areas we can still improve on, but overall it was a good game.”

After a 4-0 non-conference loss Monday against Arizona’s Ottawa University and a 3-0 win against Occidental on Wednesday, the Leopards are now 7-6-2 overall and 4-5-2 in Southern California Intercollegiate Athletic Conference play.

“It’s definitely a game that helps our team morale and our momentum going into the last stretch of the season, so I think it’s a very good result and a very good overall game for the whole team,” Estrada said.

Next, the Leopards play consecutive road games, against Chapman and Whittier, before concluding conference play Oct. 28 at home against Claremont-Mudd-Scripps.