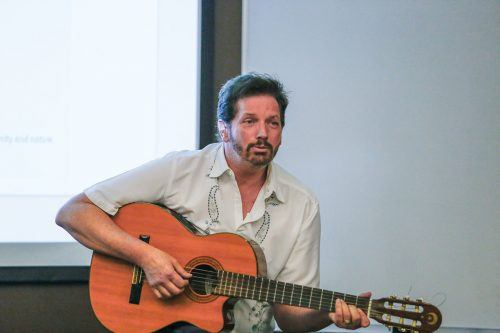 Gary Mitchell, director of Planet Rehab in San Dimas, sings an original song about the environment. Mitchell also spoke about “Understanding the Environmental Crisis of Costa Rica” on April 27 in the Arts and Communication Building. Planet Rehab is an environmental conservation organization that utilizes music and other arts to raise awareness. / photo by Breanna Ulsh

The discussion and screening of the film “The Goose with the Golden Eggs” was part of Cabrera’s senior project.

“I’ve been passionate about the environment since I was little,” he said. “I always just wanted to do something along the lines of working with nature. I guess growing up and seeing how it was falling apart, I was like, ‘I better become a part of a group that’s going to try to save it.’”

Cabrera became familiar with Planet Rehab while interning there. He then decided they were the right people to promote through his project, and that they were fighting for the right cause.

He also said that he decided to bring awareness to Planet Rehab instead of focusing on a bigger organization that already has multiple people supporting them.

Mitchell started the presentation by introducing the work of Planet Rehab, whose goal is to protect the wildlife, raise awareness of environmental issues and work on the solutions, which he summarized as nurturing the relationship between humanity and nature.

Mitchell then talked about the three pivotal moments that made him decide to create his organization.

The first was becoming aware that several animal species were migrating away from the equator as a result of climate change. The second was learning more about the Great Pacific garbage patch. The third was learning about the negative connection between beef and deforestation.

Explaining the environmental crisis in Costa Rica, Mitchell showed some of the species that are in danger of extinction in the country and how that is a result of not enough conservation efforts and some negative effects tourism brings to the country.

He said that although Costa Rica represents only 0.003 percent of the Earth’s surface, it contains 6 percent of the planet’s biodiversity, and that there needs to be more efforts to preserve the more than 352 species currently endangered in the country.

Mitchell also said that after more than 45 years of experience in the environmental conservation field, he hopes to relocate Planet Rehab to Costa Rica by 2020 to locally push for change and protect the country’s biodiversity.

“We’re tired of talking,” he said. “We want to go down and get our feet dirty and really start helping and use whatever scales that we have to help this precious planet of ours as much as possible. It may be too little too late, but we will go down fighting.”

Mitchell wrapped up his speech by playing guitar and singing a song he wrote to encourage positive change.

Next, Jones discussed the ways people can be proactive in the change they want to see, and said that taking care of the environment is usually not on the top of everyone’s priorities, but that they should get more involved.

“You can recycle, you can be a vegan, do all these things, but unless you feel the urgency in the side you’re probably not gong to change your behavior,” Jones said. “Not in ways that are really meaningful.”

Jones has taken his students to countries like Ecuador, Guatemala and Belize to experience on-the-field learning, and even organized a trip to Costa Rica in 2006.

In his presentation, he showed maps of the country’s national parks, volcanoes and coastline, as well as several pictures he took during the trip. Those included images of the countryside, palm oil industrial complexes, topography, animals and plants, among many others.

After sharing personal stories of his visit as well as fun facts about Costa Rica.

Jones left the audience with a final message of the importance of checking products’ labels to ensure they do not contain palm oil, which he said is harmful to the environment.

Palm oil can be found among the ingredients of everyday products such as soap, shampoo, cosmetics and different kinds of foods.

Before concluding the talk, Cabrera screened the documentary “The Goose with the Golden Eggs,” which showed how tourism can negatively affect Costa Rica and bring serious environmental risks to the country’s biodiversity.

The arrival of big hotel chains can propose a threat for they stripe areas of their natural resources, become barriers to the local communities, and discourage circulation of revenue in the country.

Tourists who opt to stay in such hotels usually spend on food and other activities within the hotel rather than surrounding businesses, and money is received by foreign hotel companies rather than staying in Costa Rica.

The main message reinforced by the speakers at the end was that change begins with personal initiatives and lifestyle adjustments, and that this issue is too important to be ignored.