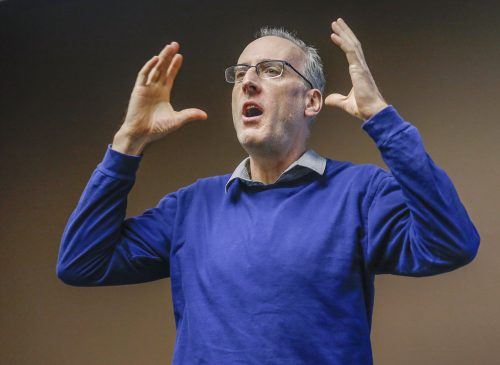 Matt Witt, professor of public administration, discussed how the United States government has contributed to perpetuating racist stereotypes and segregation, during his lecture “The Other Made Black: How State Actors Perpetuate Racist Institutions in America” Tuesday in the President’s Dining Room. Witt’s lecture was part of the weekly faculty lecture series. / photo by Breanna Ulsh

“Race is a white person’s problem,” Witt said. “It is white people that benefit from these categorizations, the material benefits conferred to white people systematically.”

Governmental actions and policies have shaped race in America and its political standing over time, which is why those engaged should consider the history of race in American politics, Witt said.

Geographically isolated black populations have prevailed based on institutionalized discrimination, such as that which exists in housing markets. This leads to racially segregated schools, churches, grocery stores and the like, Witt said.

He added that he was not referring to the Jim Crow era, but the time after 1954.

In the early 20th Century, cities across the country passed ordinances that prohibited people of color to move to predominantly white cities, and vice versa with white people moving to areas that were predominately of people of color.

Such ordinances were later found unconstitutional, not because of the unfair treatment of black community members, but because it violated the due process rights of white homeowners, Witt said.

He added that President Herbert Hoover passed the Standard State Zoning Enabling Act of 1922, which claimed to be based on preservation of home value, but was actually explicitly racialized, Witt said.

This law allowed the federal government the ability to establish housing for both white and black people, but this created even more segregation, Witt said.

These policies presented the issue of protecting the community from adverse influences. What this meant was that areas surrounding a location were investigated to determine whether or not they were compatible with the racial and social groups present.

These restrictions were later shut down in 1948, only to be replaced in 1949 with the Housing Act, which made slum clearance in urban and ethnic residential districts constitutional, Witt explained.

He said that these pressing matters of institutionalized racism must be talked about in more intimate precincts, such as classrooms or among colleagues to actually articulate the matter, but it is white people who have to initiate this, Witt said.

Al Clark, professor of humanities, said that Witt acknowledged that his presentation was a work in progress, and that due to that, Witt could not conclusively argue his point.

“He made the argument that racism or creation of the other is built into the American system,” Clark said.

Clark said that when he was in school, he was taught that the United States history was one of progression, with marginalized groups being brought into the political fold little by little.

Witt’s presentation argued that the political system itself has excluded minorities, African-Americans in particular.

“They understand perfectly well what the fraud means, imposes and establishes.”

“It’s white people who don’t know because they’ve been conditioned not to see because to see would be trauma.”

Billy Lopez, sophomore political science major, said he agrees with Witt that the issue of racism is a white person’s problem.

“They can’t really change anything. They need white people to understand… that racism still does exist.”

Witt said that white people have been conditioned to tell a story that does not allow them to see the institutionalized racism that has been in place since the beginning of American culture.

“Really, what they’re doing is telling a story that indemnifies them from any challenge to their story and secures for them a stream of benefits, material and otherwise, that can be guaranteed,” Witt said.

If white people were to start seeing these ingrained systemic issues, a disruption of assumptions would eventually work its way to the top, Witt said.

“And the top does not want that to happen,” Witt said.

Witt added that racial discourse is something that academia has done a very poor job at articulating properly.

“If only white people would more directly challenge as hypocritical and toxic to legions of our own people, we would otherwise be the country that we claim we are,” Witt said.

Jocelyn Arceo can be contacted at jocelyn.arceo@laverne.edu.