By Breanna Ulsh, Mark Acosta on November 3, 2017 in Sports, Volleyball 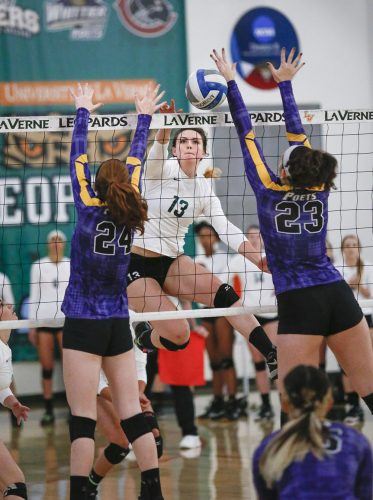 With the win, the Leopards were able to secure the second seed in the SCIAC tournament and hosted Cal Lutheran, the No. 3 seed, Thursday night. The top four seeds in the conference advance to the tournament, with No. 1 seed Claremont-Mudd-Scripps and No. 4 seed Chapman also qualifying.

“It is so special because it is a testament to how hard they work,” head coach Jenna Panatier said. “After a really tough loss last night they could have easily folded, but they did not. That shows you what kind of heart we have.”

In the first set the Leopards came out of the gate quickly.

They jumped on Whittier early and forced a timeout at 12-8.

The Leopards never faltered and continued to open up the lead by as many as 12 points.

Both teams traded points during the start of the second set. It was back and forth until La Verne claimed the lead, 7-6.

From that point on, La Verne never trailed in the set again.

The second set played out almost identically to the first set with Whittier trying to call timeouts to try to stop the run by the Leopards.

But again, it did not work. Senior outside hitter Marisa Rojo made it 21-15 when she took a pass from sophomore setter Madison Maynes and killed it.

The Poets tried to fight back, but the set ended on another kill from Rojo. The Leopards took the set, 25-28.

“We had the home court advantage, and we always play great at home,” Rojo said. “Last game was rough but we knew that’s not the team we are so we came out with a lot of motivation.”

Looking for the sweep, the third set did not get off to the start the Leopards wanted. They trailed 2-3 before the Poets were able to reel off five straight points and force La Verne to call a timeout.

After the timeout, it was much of the same.

La Verne tried to cut into the lead, but Whittier stayed in control and did not let La Verne get too close.

At 20-15, the Leopards got a kill from freshman outside hitter Kiana Valdiviseo to keep them within five points.

But Whittier would not give in, they were able to take a few errors from the Leopards and use those to win the set 25-18, avoiding the sweep.

La Verne was able to flip the script in the fourth set and get off to a good start.

Senior middle blocker Alexia Balistreri had two kills early and helped to get the lead to 7-3.

Whittier was not going away, they never let the lead get out of hand and kept fighting to keep the set close.

After a timeout from Whittier, Rojo had an ace and Balistreri had another kill to get the game to 24-20.

The game ended on a kill from junior middle blocker Kelsie Sievers that was assisted by Maynes.

“It felt so amazing but it was what we expected,” Balistreri said. “We knew we were going to win this game, we eased off on the gas pedal in the third (set) but came back and pressed on the gas in the fourth.”

La Verne was able to get big performances by Rojo and Balistreri on senior night, as Rojo paced the Leopards with 13 kills while Balistreri had nine of her own.

“We knew how important this game was because we wanted to host the first round,” Vaidiviseo said. “It was a really bad loss and we knew we were better than that.”

La Verne finished the regular season with an 18-8 record overall and an 11-5 record in SCIAC play.