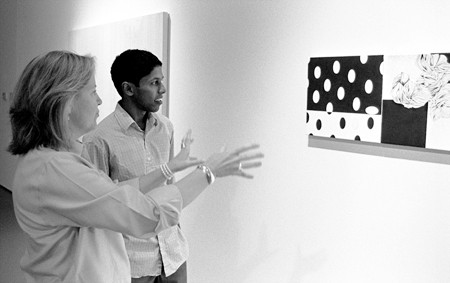 Professor of Art Ruth Trotter discussed her piece titled “Egg, Knot, Drops” with senior biology major Sundeep Samuel on Tuesday during the opening of “Microclimate.” The exhibition featured art from seven La Verne faculty members. Samuel, a former student in Trotter’s life drawing class, said he could relate to her art because of what he learned in the class. “It’s important for the students to see what the faculty members create in their studio,” Trotter said. / photo by Jenna Campbell

Students and faculty gathered Wednesday at the Harris Art Gallery to explore “Microclimate,” the faculty art show featuring three full-time and four part-time staff at the University of La Verne.

“I’m a sculptor and my sculpture explores our relationship to place and memory,” said Lord about his work. “Building Dwelling Thinking” was the inspired piece. The mixed media involved strategically placed mirrors that created an almost tangible space for the viewer.

“The viewer feels as if he or she is really there. It evokes a memory,” Lord said. “As the viewer becomes an active, aggressive observer, the viewer invades that space.”

Other artists took a less mathematical approach to their art. Hamm, adjunct professor of art, chose her medium because of its flexible quality.

“I like to paint on flexible surfaces such as paper,” Hamm said. “They are easy to move around.” Hamm’s “7 Wheels, Red Tree, Mt. Baldy, CA” was inspired by a tree that was dying from a bark beetle infestation and referenced to the cycles of life.

“The colors were inspiring,” Hamm said. “It shows how nature is connected to the earth and sky.”

Trotter’s two pieces consisted of oil on canvas and dealt with issues concerning the way art has historically been represented.

“One of the most essential issues in dealing with painting is that there is a hybridization of abstract and representation,” Trotter said.

“The knots are out of context which allows different people to experience the art differently. The side panels are abstract. They are meant to be an illusion, not a picture.”

Experiencing the art clearly portrayed itself as a central theme throughout the exhibit.

“Seeing art is different from seeing a copy or a print,” Trotter said. “Your body reacts to it.”

Students wandering about the gallery clearly experienced the art in different ways. Wendy Schwartz, senior social science major, was most compelled by Dion’s “Convergence” that consisted of acrylic on canvas.

“The colors are really calming,” Schwartz said. “It reminds me of rain- the kind that makes you snuggle up in a blanket.”

Other students reacted more vibrantly to works such as one of Thorne’s three “Untitled” pieces.

“It looks like it’s moving, like some kind of abstract art from the ‘60s,” said Mercy-Faith Kimbwala, junior business marketing major who recently transferred from the Fashion Institute of Design and Merchandise. “It reminds me of sun rays shooting out, and yet the focal point is so prevalent.”

Some faculty members chose to display art that was not so traditional. Stage, adjunct instructor of digital photography, used technology to create a computer programmed animation installation.

“The main pieces of technology making it work are a Mac G4 and a digital projector,” Stage said. “Once the programming for the movement is done, it’s a matter of plugging in the image.”

The image, composed of a series of faces with an eye randomly leading the movement, gave different impressions to each viewer.

“It’s like an eel. It keeps moving around,” said 13-year-old Aaron Colby about the image projected on the gallery wall.

“They’re photographs of various cameras that were smashed by a hydraulic press,” said Kevin Holland, manager of photography department. “It reminds you that it’s not the camera that is important. It’s the art of making an image.”

“It’s important that students and faculty see the research that artists in our faculty do,” said Keith Lord, associate professor of art. “This exhibit is our version of publishing a paper or writing a book.”