By Christopher Guzman, Jose Hernandez on March 26, 2010 in News 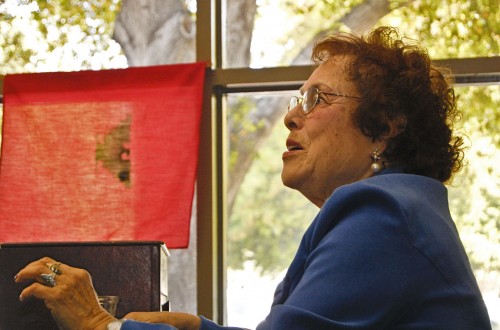 Carmen Dominguez Nevarez shared stories and ideas with guests in the President’s Dining Room during her book signing Tuesday. The book emerged as she worked on her autobiography, and discovered she could expand her work into another piece, “Inland Empire Paves the Way for Cesar E. Chavez.” The book focuses on the time she spent working with Chavez in San Bernardino during the 1950s. Nevarez graduated from La Verne College in 1948 with a degree in education. She is now a retired school teacher. / photo by Christopher Guzman

Carmen Dominguez Nevarez, ULV class of 1948, told the story Tuesday of her life as a first-generation Mexican-American student growing up in the La Verne community. And she shared her connection with the famous civil rights activist Cesar E. Chavez.

A reception preceded Nevarez’s lecture, which was then followed by a book signing of her new book “Inland Empire Paves the Way for Cesar E. Chavez.”

“My book testifies to those who helped us minorities along the way,” Nevarez said. “I refer to them as angels.”

Nevarez told her audience who filled the President’s Dining Room of life growing up in San Dimas and her experiences in the surrounding areas with segregation and civil inequality in the area in which we now see completely different.

“These were challenges that helped toughen my character,” Nevarez said.

A series of revelations throughout her young years is what drove Nevarez and opened her eyes to the need of change in her society.

Nevarez recalls an instance in which she sneaked into a segregated pool, on account of her light skin and blonde hair, but had to watch her colored sisters cling onto the fence from the outside because of their ethnicity and skin color.

Growing up in this environment, where “angels” would support Nevarez and her 10 siblings by providing them with jobs cleaning houses or babysitting, inspired her to make a change for her local community.

After graduating from La Verne, Nevarez taught for many years all over the Inland Empire. It is during these years that she had the privilege of working with Cesar E. Chavez during his movement beginning stages.

“For me, what’s interesting and of great value is that she’s a local voice who can speak and we can relate to as we would to someone like a grandparent,” said Daniel Loera, multicultural affairs director.

The true story and first-hand recollection of a local individual resonated with the students and faculty alike.

International business and language major Julie Flores was inspired by Nevarez’s presentation and was enlightened by her contributions to civil rights reformations.

“It’s a continuing struggle and we all have to do our part in our own local communities in order to create a larger, meaningful impact,” Flores said.

The presentation brought a new touch to La Verne, by providing a source of learning which has been lost through the formalization of education throughout the United States.

“I would love to see more community voices,” Loera said. “It’s so enriching listening to these stories and we should be moved by them more often by the words of others.”

It’s not everyday that the opportunity to see somebody who helped paved the path for our current minority generations arises.

The symbolization of endurance for the sake of others is something crucial for communities of Hispanics in present-day America.

“Chase your dreams and make your education a must,” Nevarez said as she addressed the future chasers of the American dream.

Jose Hernandez can be reached at jose.hernandez3@laverne.edu.