By Christopher Guzman, Julissa Cardenas on October 23, 2009 in LV Life 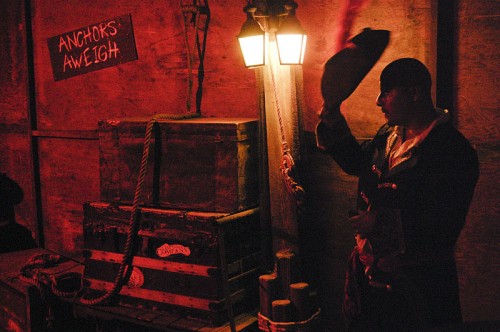 Pirates of the Dead Seas was one of three haunted mazes featured at Nightmare of Scareview Farms at the Fairplex on Saturday. Robert Silguero, one of many volunteers to join in on the fright, plays one of many characters. He greeted visitors at the entrance to the maze where they would encounter pirate ghosts and ghouls. Nightmare at Scareview Farms is open every weekend until Halloween night. Halloween night will concludes the chance for Silguero to scare the patrons, as the event will close for the year. / photo by Christopher Guzman

Blood curdling screams, terrified victims and sinister monsters lurking in the shadows were all part of the Nightmare at Scareview Farms at the Pomona Fairplex.

Every year in October, as night approaches, the Fairplex transforms itself into a nightmarish haunt that gives thrill seekers exactly what they ask for.

“I would say it is really scary, but you really have to see for yourself,” said Corey Decker, the Fairplex event manager.

After his death in July, the Fairplex decided to continue the event, but with a few new twists.

Along with 80 monsters on the prowl, the event featured three different mazes.

Vampire Vault, Pirates of the Dead Seas and The Haunted Cattle Barn, each had their own cast of characters unique to the theme of each maze.

Cathy Wadom, Fairplex director, explained the idea behind the mazes.

“With vampires being the craze right now we had to have a vampire themed maze,” Wadom said. “The new vampire movie is coming out in November so the maze seemed just right.”

“We also decided to do a pirates maze because we think that is original, and the haunted cattle barn has to do with a mass murder in a high school. It fits and relates to teenagers,” Wadom said.

Each maze had its own tour guide that lead a group of people in and out of the maze.

While the tour guide leads the way, there was always one particular monster that eerily followed behind throughout the entire tour.

The Vampire Vault maze consisted of vampire-infested streets, screaming bloody victims and their fanged assailants ready to pop out and scare at a moments notice from behind any of the walls.

Dead Man’s Hole was an entertaining trek that had an abundance of drunk, happy and menacing pirates that did not hesitate to stare in your face and walk right behind you through every corner and crevice.

Along with the monsters, wax figures were used to blend in with the rest of the set, so people could not distinguish between people and fake statues.

The Haunted Cattle Barn had killer scarecrows and bloody high school victims that were heard throughout the maze screaming for help.

The screams faded into the musical voice that was played in the background, which gave intricate details about the murderer responsible for the killings.

The only way to exit the terror filled halls was to pass the three scarecrows who waited for people to scare.

“These mazes are better than the ones at Knott’s Scary Farm,” said Angel Villamarin, a guest at Scareview Farms. “They are longer, and the monsters here actually make an effort to scare,” he said.

Donald Balderama, the tour guide for Pirates of the Dead Seas, was happy to be part of the event.

“I really enjoy it, each time just gets better and better, but don’t take my word, come and see for yourself,” Balderama said.

The Nightmare at Scareview Farms held at the Fairplex ends Oct. 31.

Admission is $20. University of La Verne Students can get $5 off the ticket price with a printed coupon sent to their email. For more information visit fairplex.com.