By Christopher Guzman, Marilyn Mejia on September 10, 2010 in News 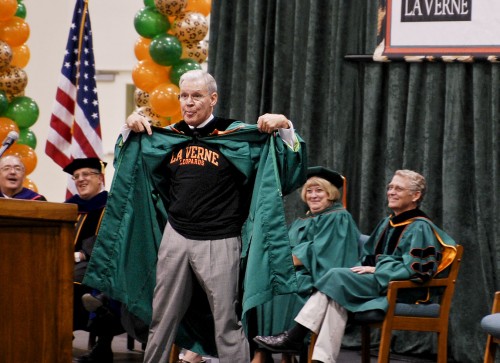 University of La Verne President Stephen Morgan was honored with a standing ovation after giving his last convocation speech Sept. 2 to the incoming class of 2014. Morgan will retire at the end of this academic year after serving as president for 25 years. Valerie Beltran, associate professor of education, and Sean Dillon, assistant professor of theater arts, also spoke. Beltran and Dillon were both recipients of the La Verne Excellence in Teaching Award for the 2009-2010 academic year./ photo by Christopher Guzman

Convocation speakers hailed a tech-savvy generation, encouraged new students to enjoy college within reason, and asked them to make a difference in the world – as so many Leopards have.

With a light and often humorous delivery, speakers bestowed their wisdom and well wishes.

Throughout his speech, Morgan referred to numerous alumni who went on to do big things.

He talked about the university values and how they should be a part of our lives after graduation. And he told the story of how ULV came to be.

His speech took a comic turn when – after telling the audience of faculty, staff and students that he believed in the power that Leos have – he proceeded to unzip his gown to reveal a ULV shirt in the fashion that Clark Kent would change out of his business suit.

Other speakers addressed different subjects meant to inspire students and welcome the freshmen to the La Verne family.

Dillon’s speech addressed the challenges we will face both in school and in our lives.

Instead of talking about responsibilities college presents, Dillon talked about the fun that we should have while we are young and that now is the time to fail and make mistakes.

“Your actions have consequences, your friends have cell phones, cell phones have cameras that take pictures, Facebook posts pictures and employers have Facebook,” Dillon said.

He also spoke about the challenges we will face and how our successes and failures will help define us.

“I wouldn’t put this on a billboard, but there’s no place to fail like La Verne,” Dillon said. “We have an outstanding community, including the students, who will be your safety net and support system when you have setbacks.”

After Dillon, Beltran spoke of the constant change our generation is facing and how technology is making these changes happen more quickly.

“Be open to change and recognize that change is a part of everyday life,” Beltran said.

She compared life and its challenges to the Fox television show “Glee,” by advising students to have passion and determination, and to deal with obstacles in the best way possible.

And Provost Gregory Dewey made closing statements, after which the alma mater was sung and the spirit bell was rung.

The ceremony was followed by a picnic held in Sneaky Park for the entire ULV community.

“The ceremony was very welcoming for new students, and I think it eases the nerves that come with a new school year,” Julie Flores, senior international business major, said.

Although most of the students who attended were freshmen, many upperclassmen also attended to show their support and hear the speeches that officially start the school year.

Marilyn Mejia can be reached at marilyn.mejia@laverne.edu.