By Ashley Morgado, Christopher Guzman on September 11, 2009 in News 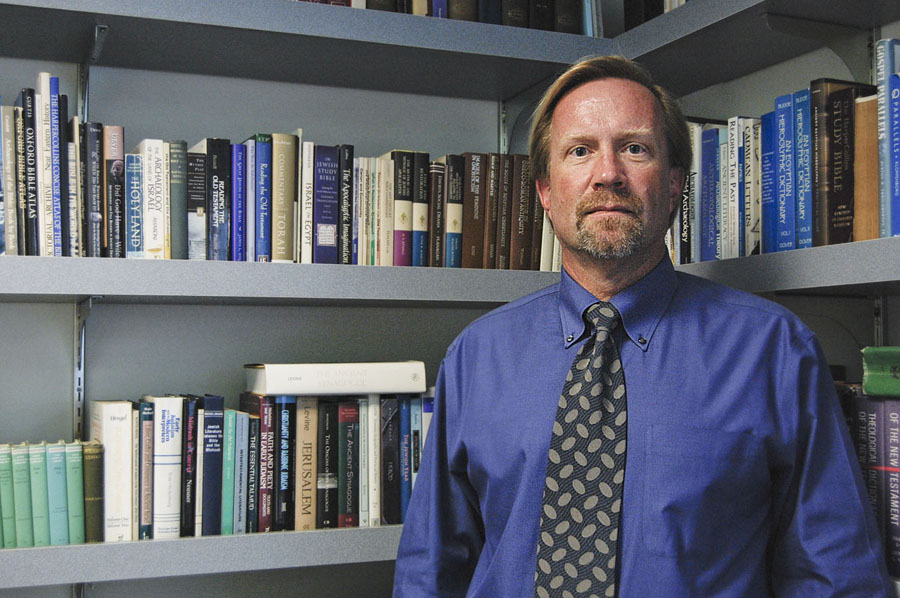 Newly appointed Interim Dean Jonathan Reed has served numerous positions in his 17 years at ULV including faculty representative to the board of trustees and chairman of the religion and philosophy department. / photo by Christopher Guzman

Jonathan Reed, a professor of religion for many years and a foremost authority on Mediterranean and early Christian archaeology, in June was appointed interim dean of the University of La Verne College of Arts and Sciences.

Not wasting any time to get started, Reed appointed an associate interim dean, Felicia Beardsley, associate professor of anthropology. The two, along with newly appointed Assistant dean Zandra Wagoner, have brought fresh ideas and a palpable new energy to the dean’s office.

“It’s a good college. We want to help it get better,” Reed said this week.

Because the interim position is only a two-year term, Reed and his team have been hard at work.

Among other things he said he hopes to “continue to (strengthen) the student and faculty relationships.”

Reed’s plans to increase the quality of the programs within the college of Arts and Sciences are involved and ambitious.

On her first day as associate interim dean, Beardsley noticed that some programs were being neglected.

She said she hopes to work with Reed to invigorate those and other programs.

One way to invigorate all of the CAS programs will be to work with the administration to bring in new students.

President Stephen Morgan agrees and says that he hopes to increase enrollment slowly over time.

Also important to this dean’s office is encouraging international travel for students and supporting faculty in their field work.

Leading by example, Reed has been dynamic in his profession of archaeology by conducting research at the Albright Institute for Archaeological Research in Jerusalem, the American Academy in Rome, and the American School of Classical Studies in Athens.

He has also taken students on study tours to Israel and Greece, showing students and faculty that learning happens in and out of the classroom.

Faculty research does not take away from teaching, in fact it enriches the classroom experience, Reed said.

Also on his drawing board will be looking at performance scholarships to encourage prospective students who excel in certain areas.

Reed hopes to award 12 performance scholarships to students eager and eligible to come to La Verne in the near future. Fundraising for scholarships, Reed said, also will be key.

Reed and his staff are aiming high to bring deserved attention and needed funds to the College of Arts and Sciences.

Morgan said he delighted with Reed and his team’s ideas and proactivity.

“(His) intimate knowledge” of the University and his “breadth of experience,” Morgan said, should serve the CAS.

The college will need some refocusing, and the they hope to move the college foward.

With Reed’s energy and pace, Beardsley added, she feels confident that the college is headed in the right direction.

Ashley Morgado can be reached at ashley.morgado@laverne.edu.