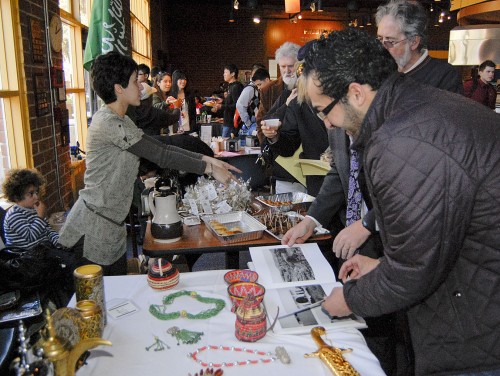 Davenport Dining Hall was transformed into a mini Saudi Arabia on Wednesday with the help of a little baklava, henna tattoos and live Arabic music.

Hundreds of students and faculty members partook of the cultural luncheon hosted by the Saudi Students Association, a 75 member on-campus club at the University of La Verne.

“We wanted to bring our country to the students, without physical movement,” Galban Alshahrani said, president of Saudi Students Association.

Booths were set up along the north-west end of Davenport offering Arabic art, a henna tattoo artist, authentic clothing and brief tutorials of Arabic architecture, technology and culture.

International student Majld Bakarman shared at one booth how his people pray five times a day to God by kneeling down facing towards Mecca, the holiest city and meeting site according to the Islamic faith.

At another booth students could learn how to write their name in Arabic with the help of a free card that introduced the Arabic alphabet. The card shared that Arabic is written from right to left and showed how to say simple phrases in Arabic, such as “good morning” and “you’re welcome.”

But aside from the informational material and the live Arabic music, the food seemed to be the main attraction. Chicken kabobs served with rice, an olive salad and tabbouleh were among the food items served, along with pita bread, hummus and the essential Arabic dessert, baklava.

“The food was interesting, in a good way,” freshman Christopher Mora said.

“He did a good job, it was 100 percent what we were hoping for. All the visitors loved the food very much,” Alshahrani said.

Part of the inspiration behind the event was not only to share the Arabic culture with the rest of the University but to make Saudi Arabian students feel at home while they study abroad in a foreign country.

Assistant Professor of Organizational Management Kathy Duncan understands how important it is to embrace diversity on campus and specifically in the classroom.

“As a professor of these students it is exciting to see a global perspective on issues dealing with different customs in the classroom,” Duncan said.

Alshahrani said he hopes to increase members of his club by 10 to 20 percent by hosting events like these, a feat that is arguably reachable thanks to the support he receives by the University, particularly the Associated Students of University of La Verne.

“They (ASULV) support us verbally and financially and really try to make organizations more successful. They play a key role in helping diversity,” Alshahrani said, who also credits Phil Hofer, director of international students, for his club’s success.

“He is the key for all international students here. He kept in touch with me to make this event successful and I really appreciate it,” Alshahrani said.