By Alexandra Arkley, Sierra Dasher on May 8, 2015 in News 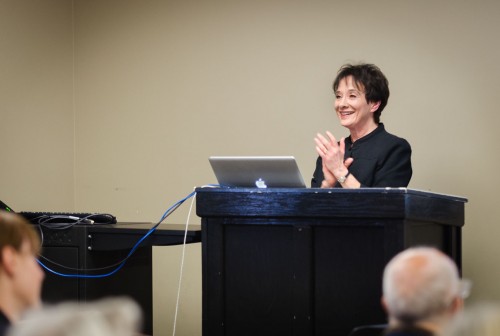 Kathy Lamkin, professor of music history, gives her last faculty lecture Monday in the President’s Dining Room. Lamkin joined the University of La Verne faculty in 1981 and will retire after this semester. Her lecture went through her educational, familial and professional timeline. Throughout her 34 years at the University, Lamkin has served as the chairwoman of both the music department and fine arts department and has helped establish the honors program and the Alpha Chi Honor Society. She has also received an Excellence in Teaching award from the University. Lamkin has a Ph.D. and master’s degree in music and music history from Northwestern University. She also has a bachelor’s degree in music education from Baylor University. / photo by Alexandra Arkley

Faculty and students packed into the President’s Dining Room to hear Kathy Lamkin give her last faculty lecture on Monday before she retires after 34 years at the University of La Verne.

Lamkin, professor of music history, gave a reminiscent lecture about her time at ULV and a tribute to all her colleagues over the past years.

“I was reflecting on my 34 years and all the special people who were so important to me – a lot of faculty, colleagues, and students, and so on,” Lamkin said. “It was special for me to look back and think about all these people.”

Lamkin started in 1981 when she was first hired at ULV into the music department. At that time, the music department consisted of only three full-time faculty, including Reed Gratz, professor of music, whom Lamkin thanked for being one of her greatest colleagues and for his thoughtfulness and friendship.

She recognized all of the faculty and students at ULV that came into her life and left a lasting impression.

She talked about how her office in Founders Hall was right next to the offices of the science faculty members, and reminisced about all the good conversations they had and how great it was to interact with colleagues outside her department.

Lamkin also acknowledged ULV alumni who have gone on to do great things in the music and theater world.

She spoke about her sabbaticals that she has taken through her involvement with the ULV study abroad program and as a part of her research in music history. She spent time in Germany and Salem, North Carolina, where she researched composer Josef Haydn, and later presented her work at a Haydn Symposium in Austria.

“I thought it was really cool when she was talking about the work she has done because she talked about that in class as well, and it was cool seeing it in a different perspective,” Melissa Lach, freshman liberal studies major, said.

She and her husband Michael Lamkin became involved with the Classical Music Festival in Austria, and it became their summer home for the past 28 years. Michael took over as the conductor-director of the festival, while Kathy played in the orchestra.

Lamkin has made a lot of contributions to ULV by helping establish the honors program and the Alpha Chi Honors Society and also made donations to help refurbish Morgan Auditorium.

“The arts are thriving at the University of La Verne, and the future looks even brighter,” Lamkin said.

She plans to travel, go to concerts, celebrate the 40th anniversary of the Classical Music Festival in Austria, continue her research, and above all spend time with her family in her retirement.

“Dr. Lamkin is one of the most inspirational faculty on campus, and you can see her dedication to the University, to the department and to music in general, so I think that dedication is so inspirational,” Grace Zhao, artist-in-residence, said.

Her advice to the audience is to follow each passion, take advantage of all opportunities, and strive for excellence.

Sierra Dasher can be reached at sierra.dasher@laverne.edu.