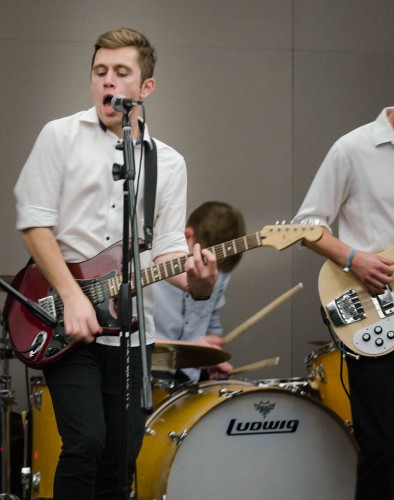 Tyler Connaghan, lead singer of Attic Empire, plays the guitar and sings popular cover songs, including “Play That Funky Music” by Wild Cherry and “Uptown Funk” by Bruno Mars on Tuesday in the Campus Center Ballroom. The Campus Activities Board hosted the Spring Break Take 2 event featuring the band, which performs frequently at venues around the L.A. area in addition to touring in other cities. They will be having another tour this summer. / photo by Alexandra Arkley

Students danced and sang along with Attic Empire as they performed popular songs such as “Ignition” by R. Kelly, “Uptown Funk” by Bruno Mars and “Play That Funky Music” by Wild Cherry for Campus Activities Board’s Spring Break Take 2 March 24 in the Campus Center Ballroom.

“We enjoy that feeling when people are relaxing and just jamming out on their own,” said Raymond Fong, Attic Empire trombonist and Cal Poly freshman music performance major.

“It really inspires confidence when everyone’s having a good time and we just kind of lose ourselves in the songs were playing and everything just kind of locks in and it’s just a great time all around,” Conrad said.

Attic Empire is not just your average garage-playing band.

They perform on tours around the area and in other cities as well.

“We did a tour to Santa Barbara this past summer and we plan on doing another tour this summer,” Shulkin said.

The group has also performed at the House of Blues, Club Nokia and at other venues in and around the Hollywood area.

“I think the coolest thing is that one of the members of the band goes to La Verne,” said junior business major Wesly Tan.

“I think it’s really cool to see a fellow student be a part of a band like this,” he said.

The crowd was enthusiastic and lively as the group performed their set.

“My favorite part is playing music live and having people enjoy the music as much as I am,” Shulkin said. “We can vibe off the energy.”

The energy was palpable in the Campus Center while the students listened to the distinctive sound of Attic Empire.

“We play space funk,” Shulkin said. “It’s like alternative and progressive rock with a more funk-feel to it.”

Attic Empire’s “space funk” seemed to be a great hit with the students.