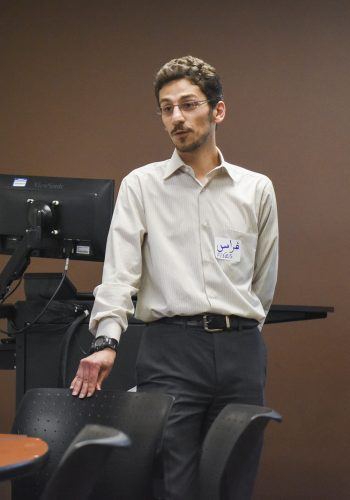 University of La Verne graduate student Firas Arodaki, president of the Muslim Students Association, answers questions at the Community Dinner with Syrian Neighbors event Tuesday in the President’s Dining Room. Following the dinner, Arodaki guided a conversation and translated the stories told by four Syrian refugees and their families, about their forced departure from Syria and new life in the United States. He said they were welcomed with support from the community. / photo by Alexandra Arkley

Students, faculty and staff gathered Tuesday at the President’s Dining Room to welcome Syrian neighbors and enjoy an evening of Mediterranean food and conversation.

The event was sponsored by the Muslim Student Association, the Office of Religious and Spiritual Life and the Islamic Center of Claremont, and the profits from tickets went to covering the cost of the food and to support local Syrian families. Attendees were also able to make donations to the American Relief Fund, which assists Syrian refugees in Pomona.

“Food brings people together,” said Firas Arodaki, a graduate student and president of the Muslim Students Association. “Discussion panels or anything else wouldn’t be able to hit the point right. We found that a dinner brings people closer and sharing a plate, sitting at the same table and having a dialogue, is very important for social engagement and social contribution.”

Assistant Professor of Communications Staci Baird was the one who reached out to University Chaplain Zandra Wagoner with the idea of organizing a community dinner. Wagoner then got in touch with Arodaki, who is Syrian and involved with human rights activism on campus. He then brought different groups on and off campus together for the event.

Some of the food served included kibbeh, hummus, white and Mediterranean rice, chicken, meat, pita bread, and fruits such as watermelon and pineapple.

Following the dinner, the crowd gathered at the dining room to hear the stories of local Syrian refugees, their transition to the United States and some of the challenges they faced. Four men shared the stories of their families in their native language Arabic, and Arodaki translated it to English for the larger audience.

All four thanked the attendees for their support and said they are happy to be in the U.S. starting a new life away from war, and said Americans have been nothing but welcoming and receptive.

After the introductions, people were encouraged to ask questions and many took the opportunity to express their support.

Professor of Anthropology Kim Martin offered her house to host a future reunion, adding that she has a large backyard where the kids can play.

“I hope that people were able to picture the difficulties they went through,” Arodaki said. “It’s not an easy process for them to come, it takes a couple of years, three years, four years, until they come here. They overcome their mental trauma because it’s never easy and the language is a huge barrier for them.”

When asked what sustained them and kept them going even in moments of transition and being in the limbo, the refugees agreed that their children were the source of their strength, along with the desire to give them a better education and life.

Arodaki said that as an international student, he came to the U.S. by choice and it was still a difficult process, and that the challenges refugees face when forced to abandon their country and leave everything behind are even greater.

Professor of Sociology Sharon Davis took the opportunity to say that America’s biggest strength is diversity, and that the community will stand behind them. “Welcome to the American family,” Davis said.

With the current devastation in Syria, CAPA behavioral science major Sothy Bou said she was inspired to attend the event and learn more about the issues other than what she was hearing in the media.

“I’m also a refugee, from Cambodia, and from a different time. From a war time also, but completely different presidency, different laws, different everything,” Bou said. “A lot of things are similar, but what I learned is just the process, how history repeats itself and seeing someone else’s process. It’s incredible how all these years later you can still relate.”

Apart from the food and atmosphere, Bou said she enjoyed the refugees’ openness and willingness to share their stories. said he hopes this event can also attract the administration’s attention and encourage people to provide more support to the refugees.

“My message is also for the University, we need to get involved with them, we need to be part of helping them, at least having an English program, especially one where they can learn English,” he said.

The American Relief Fund had fliers available for attendees to either donate and provide rent assistance, sponsor a refugee family to help integrate them into the society or provide assistance to Syrian orphans.